Review: "I, Frankenstein" Has a Cool B-Movie Vibe 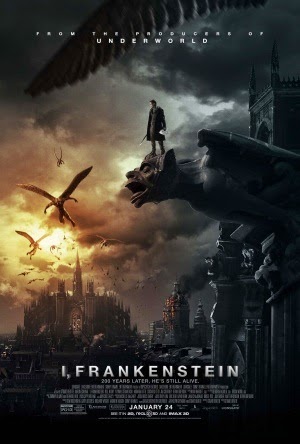 I, Frankenstein is a 2014 action-fantasy and horror film from director, Stuart Beattie.  This film is based on the comic book, I, Frankenstein: Genesis (2013), which was written by Kevin Grevioux, who serves this movie as an executive producer, writer, and actor.  I, Frankenstein also borrows a few characters and some story from Mary Shelley's legendary novel, Frankenstein; or, The Modern Prometheus, which was first published in 1818.  I, Frankenstein the movie focuses on Victor Frankenstein's creature as it finds itself caught in the middle of a centuries-old conflict.

I, Frankenstein opens in 1795.  A voice summarizes the story of Dr. Victor Frankenstein (Aden Young), the man who created a monster.  This was a soulless creature that Frankenstein made by patching together body parts from corpses.  However, he rejected his creation, which began a war between creator and creation that ended with the creation burying the creator.

Even as he buries his creator, Frankenstein, “the monster” (Aaron Eckhart) cannot know peace, because demons attack him in the graveyard.  Two gargoyles rescue the monster and take him to Leonore (Miranda Otto), High Queen of the Gargoyle Order.  She gives the monster a name, “Adam,” and tells him that the Gargoyle Order has been fighting a centuries-old war against demons on Earth in order to protect humanity.  Leonore invites Adam to join their cause, but he declines.

The demons and their leader, Prince Naberius (Bill Nighy), also want Adam on their side.  Naberius wants the secrets behind Frankenstein's creation of Adam, and he has employed a beautiful young scientist, Terra Wade (Yvonne Strahovski), to discover how to replicate the process that created Adam.  However, Adam also wants to unravel the secrets to his creation, so he too needs Terra.  But will working with Terra threaten to decide the outcome of a war between immortals?

I, Frankenstein currently has a low score with movie review aggregate sites, Rotten Tomatoes and Metacritic.  However, I like it.  I, Frankenstein is a dark, urban fantasy similar to Underworld, which was also originally created by Kevin Grevioux.  For its genre, it has a novel and easy to understand premise, which might seem silly to people who don't like this kind of story or its genre.

The acting isn't particularly great, ranging from overacting (as in the case of Miranda Otto as Lenore) to stiff (as in the case of Yvonne Strahovski as Terra).  Some performances are way too fierce (as is the case with Jai Courtney as Gideon, leader of the Gargoyle army).  Bill Nighy always seems game to play a dark fantasy baddie, and his Naberius is malevolent and cheesy in pleasurably equal measures.

Aaron Eckhart seems lost as Adam/Frankenstein's monster.  It is as if he does not quite know what to do with the character.  Is he bent on revenge?  Is he curious about himself?  Does he just want to be left alone?  If it is all of the above, Eckhart doesn't quite get the mix right.

Still, I like I, Frankenstein, and found it hugely enjoyable.  I want a sequel.


Posted by Leroy Douresseaux at 6:37 PM