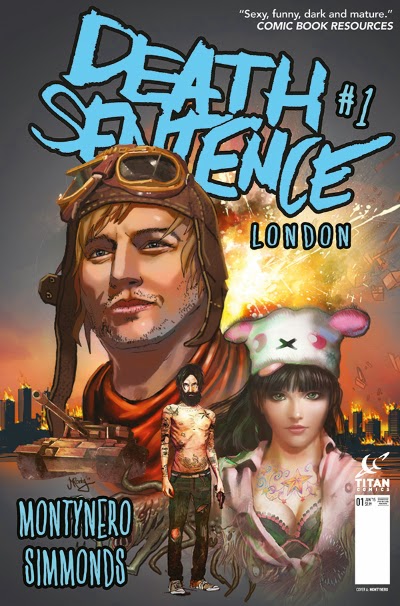 CREATOR SPOTLIGHT is a new feature designed to provide an insight into the brilliant minds behind Titan Comics’ upcoming creator-owned titles.

I sat down with Martin to discuss breaking into the industry, jumping on the Death Sentence circus, and his work on the series. – Owen Johnson, Senior Press & Marketing Officer.

SIMMONDS: My first memorable experience of comics is reading 2000AD and marveling at the great work from artists like Brian Bolland, Carlos Ezquerra, Cam Kennedy and Mike McMahon. The stories were like nothing I’d experienced before, and there was something really appealing about a weekly anthology comic full of such a diverse range of stories.  When I was a little older, I discovered my local comic shop and it opened up a whole world of great titles and introduced me to the work of hundreds of amazing artists and writers.

As a reader, comics offer something different in terms of storytelling – there’s an immediacy to reading a comic, but equally re-reading an issue or graphic novel can offer something new that you hadn’t noticed the first time round.

As an artist, I love the collaborative aspect of creating comics - in my experience, it's such an organic process between creators, from scripting to the final pages going to print, and nothing beats seeing the final pages lettered, which is where it all falls into place.

OWEN: How did you get started in the industry?

SIMMONDS: As well as visiting cons and attending portfolio reviews with publishers/editors, it made sense to meet other creators at a similar stage in their careers to me, collaborate on small projects and get our work out there for people to see it. It meant we could exhibit at cons, meet other like-minded creators and hopefully get some exposure.

I was lucky enough to collaborate on a couple of small press anthologies - Dead Roots (with Paul Alexander) and Disconnected Volume 2 (with PM Buchan), followed by working with Mike Garley (writer) on the self-published comic Eponymous. From there I started to pick up a few cover art commissions for small projects/pitches, before collaborating with Monty on Death Sentence London.

OWEN: What drew you to working on Death Sentence?

SIMMONDS: Monty and I had chatted at cons before and got on well, so when he approached me about working on the second volume of Death Sentence, I jumped at the chance. I was a huge fan of the first volume and in my opinion it was THE comic of 2013/14. Monty and Mike created a truly original, anarchic and darkly funny masterpiece with Death Sentence, and I knew it'd be a fantastic project to get involved in.

OWEN: What can readers expect from your work on Death Sentence?

Monty's pulled out all the stops with the writing, so expect some pretty intense visuals to match.  Hopefully, all the subtleties and dynamics we've worked into the pages will come across and fans of the original series will enjoy where we are taking things.

We’re both really proud of what we’ve created, and hopefully that should come across in the pages!

OWEN: What are the key influences on your style?

Growing up, I'd have to say Bill Sienkiewicz, Kent Williams and Dave McKean made the biggest impression on me. I love expressive, dynamic styles – so along with Sienkiewicz, Williams, and McKean, I’d list Jock, Frazer Irving, Greg Tocchini, Phil Noto and Tommy Lee Edwards as key influences.

When I first discovered Frazer Irving's work, I got that same feeling of excitement as the first time I saw McKean's work on Violent Cases or Sienkiewicz's Stray Toasters. The way he colours his pages is amazing - really vibrant, intense colour palettes, and definitely a major influence on how I colour my work.

Outside of comics, I'd have to say my major influences are Gustav Klimt, Egon Schiele, Aubrey Beardsley, Coby Whitmore, Bob Peak, Saul Bass and Ralph Steadman.

OWEN: What does creating this comic book mean to you?

It’s my first opportunity to work on a comic for a long run and I’ve really learnt a lot from the process. The chance to collaborate with Monty meant that I not only get to work with a fantastic writer but also on a title that I was already a big fan of. Mike's art in Volume 1 is amazing, so the bar was set extremely high, and I knew it'd be a real challenge to maintain that high standard but that was part of the appeal. It’s been an absolute joy to work on, developing new characters and knowing that you are adding to the Death Sentence universe is really exciting.

The cataclysmic effects of Monty's G-positive super-rampage through London are still being felt...but where are series icons Weasel and Verity?! And what happens when the Americans - and special agent Jeb Mulgrew - get involved?!

Created by writer Montynero and artist Mike Dowling, Death Sentence was a hit with reviewers, retailers and readers the world over. With Death Sentence: London, the scope is bigger, the action bolder, and the storyline more controversial than ever!

"The original DEATH SENTENCE was a singular work of art... how do you top that?
...MontyNero and Martin Simmonds achieve exactly that" - Dr. Shathley Q.