Review: "The Book of Eli" is Another Denzel Winner 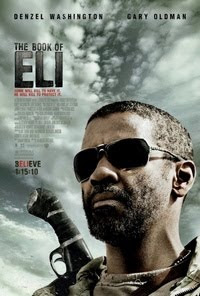 Regarding The Book of Eli, I don’t really have to say that Denzel Washington is good in this film, do I? Washington is always good, usually great – even in mediocre movies. Like the performances Washington gave in his Oscar-turn, Training Day

, the performance in The Book of Eli reflects both a meticulous craftsman and an artist. The craftsman shows in the way Washington knows the habits, the mannerisms, and the other physical details that will make the audience buy Eli as a real character. The artist is the one who turns his acting, his performance, his portrayal into a work that transfixes the viewer and transports him to another world.

So we know that Washington delivers, as always, but is The Book of Eli a good film? It’s an excellent film, and is on par with The Road Warrior

as a superb post-apocalyptic science fiction film. The Book of Eli takes place in the not-too-distant future, about 30 years after some kind of nuclear war. The cities are apparently largely empty; the highways are broken, and the earth is thoroughly seared. The most noticeably absent color is green, and everything looks faded and washed out.

Across this wasteland where there is no civilization and no law, a solitary man named Eli (Denzel Washington) walks, heading west. He hopes to find a place, a city where there is a spot of civilization. There, he can deliver a mysterious book he carries. A warrior by necessity, Eli is a peaceful man, but when challenged, he uses almost supernatural speed, cunning, and fighting skill to cut his attackers down before they realize their fatal mistake in fooling with him (think Wesley Snipes’ Blade

In a makeshift town, Eli finds his most dangerous adversary yet, Carnegie (Gary Oldman), a self-appointed despot with a small army of thieves and gunmen. Besides Eli, Carnegie is the only one who realizes the power of Eli’s mysterious book. However, Carnegie’s stepdaughter, Solara (Mila Kunis), surprisingly becomes fascinated by Eli, and her decision to choose between Eli and Carnegie will change each man’s fate.

Besides Washington, Gary Oldman also delivers a grand performance, creating the broken down tyrant Carnegie in subtle layers, giving this film the kind of showy crackpot that every action movie needs. In Oldman’s hand, however, this loud, crazy, killer villain is always way, way more than the standard bad guy.

There are other things about The Book of Eli that capture my attention. The religious and spiritual elements are probably the secret ingredients that make this film a winning dish. Or let’s say religion is the independent voter that wins The Book of Eli the election. I think that Hollywood often forgets the complex flavors that Christian elements and themes can give science fiction films.

The other thing that just blows my mind is how good the Hughes Brothers are at directing films (and music videos). Albert and Allen Hughes have both the eye and the visual storytelling acuity in which to tell gripping, grabbing narratives in the motion picture medium. Everything that the brothers direct the camera to capture – a still moment, a scene that cuts from one place to another, a long moving shot – not only looks great, but is also mesmerizing storytelling. The truth is that these guys just don’t make movies as often as they should, and they are robbing us of their amazing talent.

The Book of Eli is the first fantastic film of 2010, which is reason enough to see it. Seeing the under-utilized Jennifer Beals and getting a Malcolm McDowell cameo are obviously delightful extras.