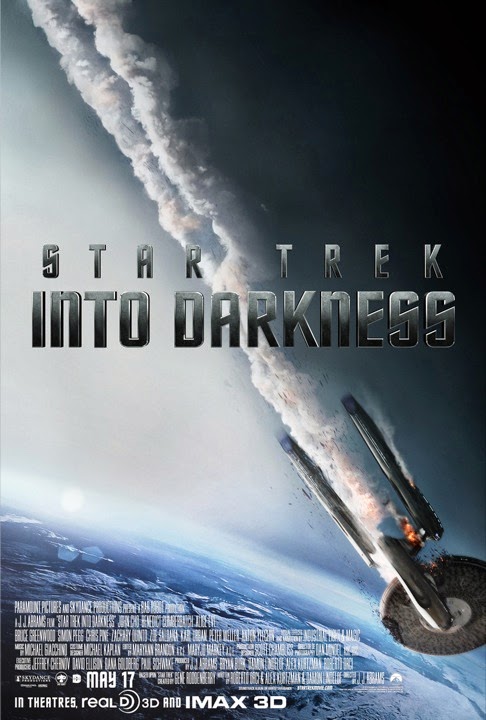 SCI-FI/ACTION/THRILLER with elements of drama and comedy

Star Trek Into Darkness is a 2013 science fiction and action film from director J.J. Abrams.  This movie is the 12th film in the Star Trek film franchise, which is a continuation of “Star Trek,” the beloved 1960s television series.  Star Trek Into Darkness (also known as “STID”) is the follow up to the 2009 film, Star Trek, which was a reboot of the franchise by J.J. Abrams and writers Roberto Orci and Alex Kurtzman.  STID pits the crew of the Enterprise against an unstoppable and mysterious force of terror from within their own organization.

The 2009 film was stunningly clever and wildly imaginative, and a jittery, sexy, and fresh take on a venerable science fiction classic.  STID is not necessarily fresh (or not as fresh its predecessor), but it is a crazy, sexy blast.

Early in the film, Capt. Kirk pulls a stunt that gets him into trouble with Starfleet.  He gets a chance at redemption after Commander John Harrison (Benedict Cumberbatch) launches a series of terrorist attacks against the Federation (United Federation of Planets).  At the behest of Fleet Admiral Alexander Marcus (Peter Weller), commander-in-chief of Starfleet, Kirk leads the Enterprise on a mission against Harrison.  To capture this fugitive, however, the Enterprise must travel to Kronos, the home world of the Klingons, an alien race that is practically in a state of war with the Federation.

Star Trek Into Darkness is epic; it’s like three or four mini-movies put together to form one big, massive, sci-fi extravaganza.  It is a rousing adventure, a riveting action-adventure in space, and a swashbuckling, seafaring adventure set on the tumultuous oceans of the starry space-ways.

The film largely focuses on Kirk and Spock, and thematically, the story revolves around their personality traits, quirks, and flaws.  Revenge is also a theme, best personified by the “John Harrison” character, although I am conflicted about Benedict Cumberbatch’s casting and performance as Harrison.  Physically, Cumberbatch is miscast because he is too pasty-faced and looks more like a sneering kid than a monster/terrorist.  His athletic build looks pudgy even in a sleek bodysuit.  Cumberbatch vacillates between being too posh or too pissed off; it makes the character occasionally comical.  Cumberbatch is STID’s big misstep that luckily does not become a fatal flaw.

On the other hand, Simon Pegg is superb as Scotty.  He provides spot-on, dead-on humor in the film, and Pegg maximizes his impact upon each scene in which Scotty participates.  Pegg is STID’s best foot forward.

I understand that some hardcore Star Trek fans (Trekkies or Trekkers) were upset about at least not exited by STID.  I am not a hardcore fan, but I love me some Star Trek – the original television series, especially.  Star Trek Into Darkness feels like Star Trek to me.  J.J. Abrams’ two Star Trek films are the breathtaking, mind-blowing adventures that earlier Star Trek television series and films could not be – mainly for budgetary and technical reasons.

Thus, the Star Trek movies of J.J. Abrams and writer Roberto Orci, Alex Kurtzman, and Damon Lindelof, in some ways, do not look like their Star Trek predecessors.  But the spirit of Star Trek is there, even behind all that shiny computer-generated, special visual effects.  I unreservedly endorse that you, dear readers, follow Star Trek Into Darkness into a grand time at the movies.  This film is not without its flaws, but somehow, STID’s imperfections make it seem all the more beautiful to me.


Posted by Leroy Douresseaux at 5:09 AM