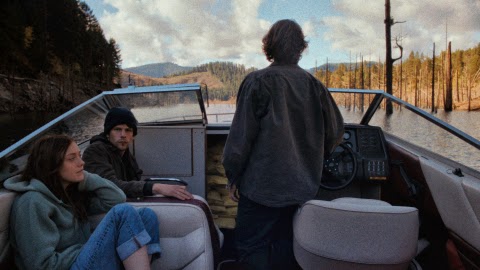 (The above image is a scene from the film, "Night Moves," copyright Tipping Point Productions and courtesy of Business Wire)

LOS ANGELES--(BUSINESS WIRE)--Cinedigm (NASDAQ: CIDM) has acquired all North American rights to NIGHT MOVES, directed by acclaimed American independent filmmaker Kelly Reichardt. The film, starring Jesse Eisenberg, Dakota Fanning and Peter Sarsgaard, made its world premiere at the Venice International Film Festival earlier this month followed by a North American debut at the Toronto International Film Festival and was recently awarded the Grand Prize at the Deauville Film Festival. Cinedigm will release the film in Spring of 2014.

“Kelly is one of the most original and distinctive voices in American cinema today. An expansion on her previous work, NIGHT MOVES maintains that unique Kelly stamp that long ago made us huge fans,” said Vincent Scordino, Senior Vice President of Theatrical Releasing, for Cinedigm.

"We couldn't be happier to be working with Cinedigm," said the filmmakers. "Their enthusiasm for the film was amazing, and we're thrilled to be collaborating with them on its release."

Reichardt’s award-winning films include RIVER OF GRASS, OLD JOY, WENDY AND LUCY and the acclaimed Michelle Williams-starring Western MEEK’S CUTOFF. NIGHT MOVES is her fifth feature film and tells the story of three radical environmentalists plotting the explosion of a hydroelectric dam—the symbol of the energy-sucking, resource-devouring industrial culture they despise. The suspense-filled film adds a “noir-thriller” to Reichardt’s already impressive and diverse body of work.

The film is a production of Maybach Film Productions, RT Features and filmscience. It was produced by Neil Kopp, Anish Savjani, Chris Maybach, Saemi Kim and Rodrigo Teixeira. The deal was negotiated by Cinedigm’s Director of Acquisitions Emily Rothschild with UTA representing the filmmakers.

ABOUT CINEDIGM:
Over the past decade, Cinedigm has led the digital distribution revolution that continues to transform the media landscape. In addition to its pioneering role in transitioning movie theatres from traditional film prints to digital distribution, Cinedigm continues to advance worldwide cinema modernization with its suite of software products allowing exhibitors and distributors to manage their newly digital businesses with efficiency, insight and certainty. And, as the leading distributor of independent content in the world, Cinedigm collaborates with producers and the exhibition community with unequalled transparency to market, source, curate and distribute quality content across all digital platforms to targeted and profitable audiences. The company’s library of over 5,000 titles includes award-winning documentaries from Docurama Films®, next-gen indies from Flatiron Film Company® and acclaimed independent films and festival picks through partnerships with the Sundance Institute and Tribeca Film. Cinedigm is proud to distribute many Oscar®-nominated films including THE INVISIBLE WAR, HELL AND BACK AGAIN, GASLAND, WASTE LAND and PARADISE LOST 3: PURGATORY.