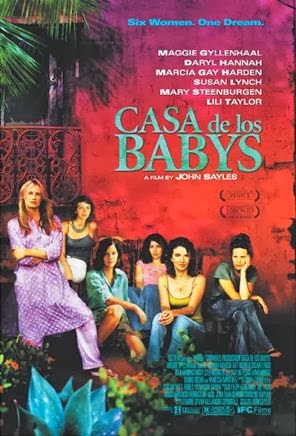 The subject of this movie review is Casa de los Babys, a 2003 drama from writer-director John Sayles.  The film focuses on a group of American women in South America where they hope to adopt babies.  Casa de los Babys was screened at various film festivals before receiving a limited theatrical release in September 2003.

In John Sayles’ film Casa de los Babys, six white American women from varying backgrounds have traveled to an unnamed Latin American country to (hopefully) pick up newly adopted babies.  However, they end up stuck in the country because of laws that require they live there while a months-long process of paperwork slowly winds itself through the red tape maze.

The women come to reside at the “casa de los babys,” a hotel run by a woman who is involved in the adoption process.  Oh, the women may very well get babies, but they find themselves going through hoops; mostly it’s about waiting – waiting and getting to know the other mothers – some with sad or scary personal stories.

It’s always hard to figure out what Sayles is trying to say in his films; that’s assuming he has a message.  His movies are always about the characters, and while story and setting aren’t necessarily secondary, the joy of watching one of his movies is in watching how characters live in their environments.

The structure and proportions of Sayles’ films suggest realism, but it’s really the best drama – rooted in reality with the conflict idealized to make it more intriguing.  There are few easy answers, and Sayles films usually leave me with so many unanswered questions.  As usual with a Sayles movie, I’ll heartily recommend this heartfelt and heart-wrenching film and also tell you you’re dumb if you don’t like Casa de los Babys.


Posted by Leroy Douresseaux at 9:30 AM