Review: "The Chronicles of Riddick" is Epic 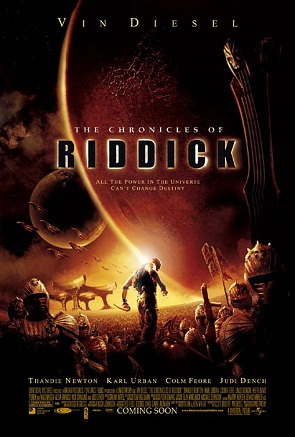 The subject of this movie review is The Chronicles of Riddick, a 2004 science fiction and action-adventure film from writer-director David Twohy.  Starring Vin Diesel in the title role, this film is a sequel to the 2000 science fiction thriller, Pitch Black.

Five years after the incidents in the movie Pitch Black, the dark hero Riddick (Vin Diesel) is a hunted man, but mercenaries aren’t just hunting Riddick to send him back to prison.  A fellow survivor of Pitch Black, Imam (Keith David), seeks Riddick because the Imam’s home world needs Riddick’s kind of evil to fight evil.  In The Chronicles of Riddick, the title character takes on the world conquering Necromongers and their vicious, quasi-supernatural leader, the Lord Marshal (Colm Feore).  Apparently, the Lord Marshal and Riddick have a mutual past.  Riddick learns that his people were known as the Furians, and a prophecy said that the Lord Marshal would die at the hands of a Furian.  Thirty years after the Lord Marshal’s pogrom against the Furians, the most contrary and stubborn of them all, Riddick, comes looking for payback.

The Chronicles of Riddick isn’t by any means a great movie, but it’s rather a very entertaining macho movie.  Despite the sci-fi trappings, the film and its title character are basically throwbacks to the kind of action movies and muscular heroes that stomped the shit out silver screen bad guys in films like the Rambo, Die Hard, and Terminator franchises.  Visually, the production design is as dark as The Empire Strikes Back and The Crow, so TCOR is very much the work of talented artists, craftsman, and photographers and CGI artists.

Beyond that, director David Twohy has put together a fun film full of explosions and (relatively) gore free wrestling matches.  TCOR may look like a video game, but it’s futuristic fisticuffs in which the dark champion speaks with the force of muscular body and wins by guile and savvy.  Vin Diesel may not be a solid actor, but he’s game to throw testosterone around a movie set, and the lead doesn’t need to be a great actor when a fine stage actor like Colm Feore (he was the bad guy Andre Linoge in the TV mini-series Stephen King’s “Storm of the Century”) plays the villain.

I had a good (if not great) time, and when it comes down to it, The Chronicles of Riddick is a slugfest man’s movie for the guy who’ll watch any half decent action movie.  And this one is a lot better than half decent.  Some ladies might get a kick out of it, too.

Read the Pitch Black review and The Chronicles of Riddick: Dark Fury review.


Posted by Leroy Douresseaux at 7:35 AM