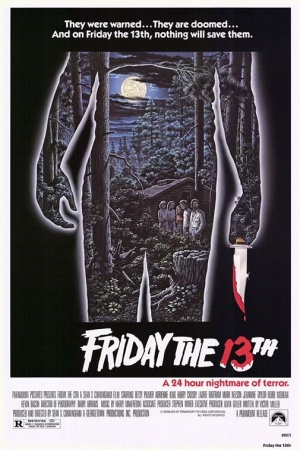 Friday the 13th is a 1980 slasher horror film from producer-director, Sean S. Cunningham.  It was the first movie in what is, as of this writing, a 12-film franchise, which includes a 2009 reboot of the franchise and a crossover film with another horror franchise, 2003’s Freddy vs. Jason.  The first Friday the 13th focuses on young camp counselors that are being stalked and murdered by an unknown assailant, as they try to reopen a summer camp with a troubled history.

Annie (Robbi Morgan), one of the early arrivals, finds that the town is not exactly happy about the idea of Steve reopening the camp, which has been the site of murders, fires, and water poisonings.  In fact, some of the locals specifically try to warn Annie to leave.  As this Friday the 13th turns to evening, the counselors are not aware that someone is watching and waiting and also preparing to kill them one by one.

Recently, I watched, for the first time, Friday the 13th in its entirety, and I liked it more than I ever thought I would.  It was clearly influenced by John Carpenter’s classic, 1978 slasher film, Halloween, but it is different.  I find Friday the 13th to be both moody and matter-of-fact about the murders committed in the film.  It is almost as if the filmmakers and storytellers (which include screenwriter Ron Kurz, who did not receive an onscreen credit) are saying to us that while sad, the death in this movie has to be.  This movie is less about pandering to the audience than about depicting a tragedy that has to be.

The film score for Friday the 13th, composed by Harry Manfredini, is probably the most important creative element in making this movie a chiller and thriller.  Manfredini seems to use elements from John Williams’ musical score for Jaws (1975) and Bernard Herrmann’s for Alfred Hitchcock’s Psycho (1960).  If talent borrows and genius steals, it was a genius move on Manfredini’s part to emulate the best musical cues from Jaws and Psycho, strains of music that are perfect for creating an atmosphere of fear and impending doom in Friday the 13th.

After 33 years, anyone familiar with the Friday the 13th franchise knows the identity of the killer in the original movie, but I still will not reveal the identity.  I think one of the things that make the original movie stand out from both its sequels and other horror films is who and what the killer is.  Of note, acclaimed actor Kevin Bacon has one of his earliest screen roles in Friday the 13th, and that includes a rather explicit sex scene, in which his sex partner claws his buttocks.  Including the fact that this is a horror movie classic, bare Bacon is as good a reason as any to see Friday the 13th.

Seriously, I like this movie’s scrappy nature.  There is something about its awkward, not-well made spirit that actually makes the movie seem... well, well-made.  Friday the 13th has a low-budget aesthetic that surprisingly appeals to me, and in terms of photography, there are a few moments that are captivating.  In fact, some of this movie’s scenes and best moments are as effective as the best moments found in film thrillers that are much more admired.