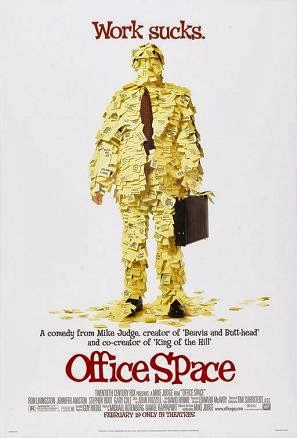 The subject of this movie review is Office Space, a 1999 workplace comedy from writer-producer-director, Mike Judge.  The film follows a group of workers at a software company who hate their jobs and decide to rebel against their greedy boss.

In 1999, 20th Century Fox released a comedy by “Beavis and Butt-head” creator Mike Judge that quickly disappeared from theatres.  This is, however, one of the instances since the advent of widespread home video entertainment that videocassettes and DVD’s have saved a great film from obscurity, and thankfully so.  Anyone who has ever worked as a drone in a thankless job will thrill at the outrageous and dead-on comedy of Judge’s film, Office Space.

Peter Gibbons (Ron Livingston) is a software engineer at the company Initech.  Peter is a cog at the company, writing code in an ultimately thankless job, but the job is only one portion of a seemingly meaningless life.  His difficult girlfriend takes him one Friday evening to a hypno-therapist who promptly dies after putting Peter in a state of total bliss.  From then on, Peter takes a new look at his life, and his new dismissive attitude about his job catches the attention of efficiency experts hired by Initech to fire extraneous employees.

The efficiency dudes get Peter a promotion, but get his co-workers, Michael Bolton (David Herman) and Samir Nagheenanajar (Ajay Naidu), fired.  The trio then hatches a plan to steal money from an Initech corporate account using a computer virus.  But a coding error may get the guys caught and in a federal “pound me in the ass” prison, and Peter may not be able to win back his new girlfriend, Joanna (Jennifer Aniston).

All props to Judge for getting the most traction out of many of the film elements.  The script has an uncanny sense of verisimilitude about the workplace, especially the corporate cubicle world of white-collar labor, but the humor and themes capture the dead spirit of most workaday jobs.  Judge’s direction is light, breezy, and quick, and he still manages to capture the right moods in which to communicate particular messages, ideas, and themes to the audience.  Also, his use of music, he particularly 80’s, old school, gangsta and hardcore rap somehow really works for this film.

What especially makes Office Space memorable is its cast.  Ron Livingston sells himself as both the everyday working man and the frustrated white-collar worker.  Gary Cole is slimy, smooth, and cool as Peter Gibbons' do-nothing, pencil-pushing boss, Bill Lumbergh.  However, the star-making turn in the film is Stephen Root’s nerd, percolating psychopath, Milton Waddams.  I don’t know if viewers recognize Milton in themselves or their co-workers, but maybe we all just find him so funny.

If it has one major flaw, it is that Office Space is a riot of laughs almost to the halfway point until it slips on a subplot.  When the script takes the film deeply into the genre plot about the money scam, the film seems to lose focus of the fact that it’s the workers versus their workplace annoyances that really make Office Space a gem, not some half-assed sub-plot.  Thankfully, the film returns to the workers’ trials and tribulations before it closes.


Posted by Leroy Douresseaux at 6:20 AM