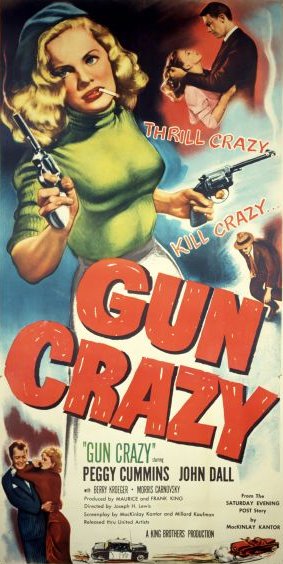 The subject of this movie review is Gun Crazy, a 1950 film noir crime drama directed by Joseph H. Lewis.  The film was originally released under the title, Deadly is the Female, apparently sometime in 1949.  Gun Crazy is based on a short story written by MacKinlay Kantor, one of the film’s screenwriters.  Although Millard Kaufman is also credited as a screenwriter on Gun Crazy, he is not.  Kaufman was a “front writer,” meaning he allowed another screenwriter to use his name in order to work on the project.  The writer who used Kaufman’s name was Dalton Trumbo.

Trumbo was one of the “Hollywood 10.”  They were cited for contempt of Congress for refusing to give testimony to the House Committee on Un-American Activities (HUAC) concerning Communist activity in Hollywood in the 1930s and early 1940s.  Trumbo and others were blacklisted from working on Hollywood film productions, or, if they did work on a production, their names were omitted from the film.  Trumbo is credited as the writer who reworked MacKinlay Kantor’s Gun Crazy story into a tale of a doomed love affair, but he could not receive a screen credit for his work on the film.

Gun Crazy the movie introduces Bart Tare (Rusty Tamblyn).  As a boy, Tare was obsessed with guns, although he was loathed to kill anything.  His obsession lands him in a reform school, but he retains the support of his family and especially of his friends, Dave Allister (Paul Frison) and Clyde Boston (Trevor Bardette).  After leaving the reform school and doing a stint in the army, adult Bart (John Dall) returns home to find that the adult Dave Allister (Nedrick Young) is now the editor of their hometown paper and that Clyde is now Sheriff Clyde Boston (Harry Lewis).

The trio attends a traveling carnival where Bart meets the love of his life, Annie Laurie Starr (Peggy Cummings), a carnie trick pistol shooter, who, like Bart, is gun-obsessed.  The two run off and get married, but Laurie is a dangerous girl who wants the high life.  The legitimate jobs that poor Bart can get won’t pay enough to buy her all the things she wants.  He’s too in love to be without her, so it’s easy for her to talk him into a life of crime.  They commit a string of daring robberies across the country that eventually cause them to kill.  Hunted and desperate, Laurie and Bart head back home to Bart’s sister, Ruby (Anabel Shaw), and her family, but Sheriff Clyde and Dave are waiting for them.

Experts and students of the film genre known as Film-Noir consider Gun Crazy to be classic noir.  The film, released initially under the title, Deadly is the Female, is based upon novelist MacKinlay Kantor’s short story that was originally published in The Saturday Evening Post.  Gun Crazy was mostly forgotten until it fell into favor in France with film critics, especially the group of critics who would themselves one day become filmmakers and also become tied to a movement called French New Wave – the most famous of the lot being François Truffaut and Jean-Luc Godard.  Godard’s 1960 film, Breathless, apparently references Gun Crazy.

Although many critics and reviewers have praised director Joseph H. Lewis for the film’s documentary feel, used especially during the robbery sequences, Lewis’ film is actually very stylized and expressionistic from a visual point of view.  Everything that is important for the audience to know about Laurie and Bart:  their roles, identities, thoughts, and feelings, as well as the roles of the people around them, Lewis tells through visual cues.  From the titled camera shots early in the film that suggest the mental state of young Bart to the sexualized first encounter of Bart and Laurie – all are stylish.  In fact, Lewis really pushes the idea of sex and the duo’s obsession with guns being interrelated.

The film has some good performances, a few exceptional – especially British actress Peggy Cummings as Laurie and, in two small roles, Barry Kroeger as Laurie’s carnival boss, Packett, and Morris Carnovsky as Judge Willoughby.  The script is a good blueprint for Lewis, but is soft on the dichotomy between Bart’s two worlds – Peggy and crime and Dave and Clyde.  Ultimately this film does fit the auteur theory that Truffaut, Godard, and their contemporaries pushed – the idea that the director is the film’s author.  Joseph H. Lewis takes the best that his cast and crew give him and turn Gun Crazy into a film of notorious love, sexual tension, lust, and the kind of violence that can come from two lovers’ obsessions.  This is definitely a precursor to Bonnie and Clyde.


Posted by Leroy Douresseaux at 8:38 AM