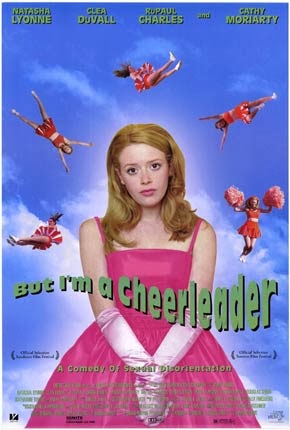 The subject of this movie review is But I’m a Cheerleader, a satirical film and romantic comedy from director Jamie Babbit.  The film focuses on a naive teenager who ends up in a conversion therapy camp after her straitlaced parents and friends come to suspect her of being a lesbian.

You are who you are.  The only trick is not getting caught, sez Clea DuVall’s character in the uproarious satire about modern America’s desire to “get rid” of homosexuals, But I’m a Cheerleader.

Megan Bloomfield (Natasha Lyonne, American Pie) has a picture of a cheerleader in her locker, a poster of Melissa Etheridge on her bedroom wall, and likes tofu, so her parents (Mink Stole, Bud Cort) are sure she’s a lesbian.  They enroll her in True Directions, a “dehomosexualing” program that purports to make gay kids straight.  Megan, already confused, is then caught between two extremes:  the cruel, hateful, and spiteful headmaster Mary J. Brown (Cathy Moriarity) and an unrepentant rebel lesbian Graham Eaton (Clea DuVall, The Faculty) who is attracted to Megan.

But I’m a Cheerleader is probably the best satire I’ve ever seen on the subject of the American bigoted mindset about homosexuality.  It is a hilarious comedy, and the romance between Megan and Graham is heartfelt and touching in the portrayal of the girls’ awkwardly advancing towards each other.  However, the film’s sharpest barbs are simply aimed at the crass behavior and sheer ignorance of bigotry and hate directed at homosexuals.  It’s one thing to disagree with a “lifestyle;” it’s an entirely different thing to try to destroy that with which you disagree.  I won’t resort to boring speeches and politics, but But I'm a Cheerleader hilariously makes its points.

Director Jamie Babbit and screenwriter Brian Wayne Peterson are sneaky in the way they communicate the messages under cover of outrageous characters and outlandish humor.  I laughed a lot, but I have to admit that you’d have to be really dense not to get the obvious points.  Homophobes that can get the message may hate this film; after all, the creators don’t go out of the way to camouflage their satire.  It’s blunt, but not annoying.  The film is funny, even when it’s being sad.  The film does drag heavily at some moments, and sometimes I was ready for the joke to end; still, the film always picked itself up with something delightful and surprising.

It’s in the power of the film’s sarcasm and irony that we can laugh at human folly, but a part of us sees the folly in ourselves when we watch Cheerleader.  Will we ever live in a free country where people don’t have to be discriminated against because of sexual orientation?  Hell no!  People will discriminate and hate, and then go to church on Sunday and proclaim their love for GOD in vigorous screams, because GOD is all about hating faggots, right?

And that’s fine in way because human folly will keep us knee deep in really good satire like But I’m a Cheerleader for the foreseeable future.  The soundtrack’s cool, too.