See a Brother on the "Down Low" in the Indie Film, "FOUR" 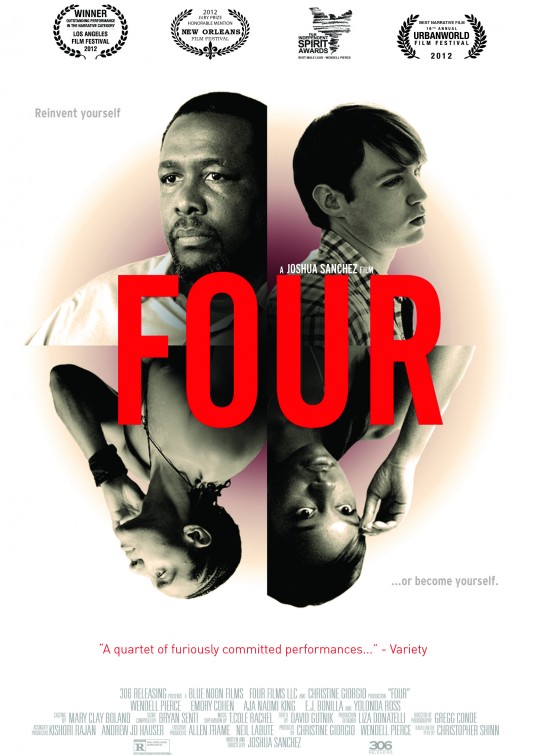 NEW YORK, Sept. 5, 2013 /PRNewswire/ -- Actor Wendell Pierce (HBO's "The Wire") takes the lead in, FOUR, a new film in which he plays a closeted middle-aged man who, while away from his family on a "business trip" on the Fourth of July, is actually out on a date with a teenage boy he met online.  And while he's away, his wife and daughter are left at home to quietly deal with the reality he leaves behind.

Pierce, who was nominated for an Independent Spirit Award for his performance, believes people should be uncomfortable with this movie, accurately reflecting the discomfort people can have about the life choices of others.  "I expect people to say, 'Why did Wendell participate in the emasculating of a black man?'  The real question is, 'Why do you feel as though that's emasculating?'"

The film not only challenges the cultural ideals of black masculinity, but also creates dialogue about the "in-between" existence that many middle class minorities live (i.e. being "too black" or not being "black enough"), about how people suppress their true selves in order to maintain the favor of others and about how many people keep God at arm's length.  It's also a portrayal of a black family rarely seen on film.  Wendell Pierce will be on The Tom Joyner Morning Show, on September 9, to discuss the film.

With a mostly minority cast, and helmed by first-time filmmaker, Joshua Sanchez, FOUR powerfully explores race, class and sexuality.  The cast includes Aja Naomi King (Damsels in Distress), who plays a role that any young black woman who has ever felt pressured to straighten her hair, can relate.  Emory Cohen (The Place Beyond the Pines) and E.J. Bonilla (ABC's "Revenge"), who was nominated for an Imagen Award for his performance, play powerful characters who intersect Pierce and King's lives for the night.

FOUR will be released, beginning September 13, at the following locations with the director, and members of the cast, participating in Q&As at each location:

The distributor is also hosting several giveaways surrounding the film, including one on Instagram in which a winner, and three of her girlfriends, will each receive $100, manicures and pedicures, a dinner for four and tickets to see the film.

About 306 Releasing
Backed by nearly 15 years of film industry experience, 306 Releasing takes a customized approach to film distribution, never ceding to the mentality that a theatrical release is a futile proposition.

Posted by Leroy Douresseaux at 5:46 AM