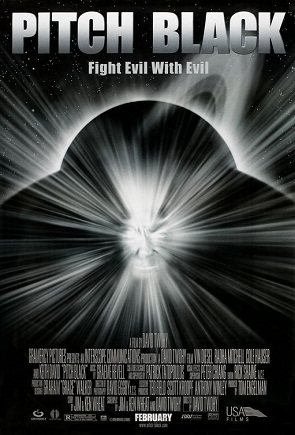 The subject of this movie review is Pitch Black, a 2000 horror thriller and science fiction film from director David Twohy.  The film puts the survivors of a cargo spacecraft on a desert planet, where they must survive an onslaught of murderous creatures, and their hope for survival rests in a dangerous criminal.

Before The Chronicles of Riddick, the character Richard B. Riddick first appeared in the movie, Pitch Black.  The film by screenwriter turned director David Twohy (Warlock, Waterworld) was a surprise, modest hit in early 2000, and is about a group of space travelers marooned on a seemingly lifeless sun-scorched world where the glaring sunlight hides a dark secret.

Riddick (Vin Diesel) is a convicted murder being transported by a bounty hunter (Cole Hauser) masquerading as a law officer.  When the space ship carrying them crashes, the two men have to temporarily put outside their conflict.  They and the rest of the ragtag band of survivors are slowly finding signs of hope that they may endure the harsh world and maybe even escape, when something begins to skitter around the shadowy edges and the dark beneath the lit surface – something vicious and hungry.

Pitch Black is a very pleasant and entertaining sci-fi, horror film.  Wrought with thrills and fraught with perilous obstacles for the characters, the film has a quick setup before rapidly plunging into non-stop frights and tension.  Though the acting isn’t noteworthy, it’s quite serviceable to the meat the story.  Twohy does an exceptional job taking what was B-movie material no more special than most “original” TV movies on the Sci-Fi Channel and turning it into a fairly entertaining B-movie film experience.  It’s not great, but when the film kick starts the humans’ battle for survival, Pitch Black becomes quite good.

The film also loses none of its potency on the small screen.  Pitch Black should please viewers who like a mixture of sci-fi and horror in the tradition of Aliens or John Carpenter’s The Thing.


Posted by Leroy Douresseaux at 6:57 AM