Review: "The Order" is Unfortunately Out of Order 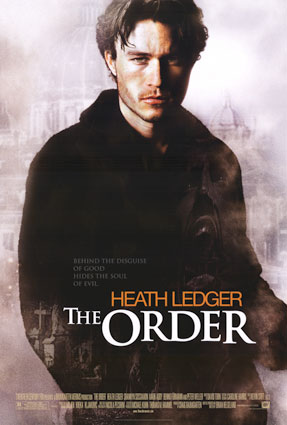 MYSTERY/HORROR/THRILLER with elements of and fantasy

The subject of this movie review is The Order, a 2003 mystery-horror film from writer-director, Brian Helgeland.  The film stars Heath Ledger as a young priest who travels to Rome to investigate the troubling death of the head of his order.

In Oscar® winning screenwriter Brian Helgeland's (L.A. Confidential) The Order, two priests belonging to an arcane order known as the Carolingians and a troubled painter track a figure of Catholic lore known as the Sin Eater.  When the leader of the Carolingians, Dominic (Francesco Carnelutti), dies, Alex Bernier (Heath Ledger) goes to Rome to investigate the circumstances of his mentor’s mysterious death.

Dominic’s body bears strange scars that may be the markings of the Sin Eater, a renegade who offers absolution of the gravest sins.  This is the only way to heaven for those who are outside the jurisdiction of the church, either by choice or because of excommunication.  However, there is a bigger problem; as Alex and his own colleague Father Thomas Garrett (Mark Addy) search for the Sin Eater, there may be a conspiracy surrounding Alex, drawing him closer to the Sin-Eater, a centuries old man named William Eden (Benno Fürmann).

The Order has an interesting premise, and it actually could have been a fairly good suspense thriller (and a creepy one, at that) without the hokey special effects.  The Order’s story is basically a tale of religious conspiracy, in this case, that old Hollywood standby, a conspiracy reaching the upper levels of the Roman Catholic Church and involving arcane Catholic lore.  One can wonder what Helgeland was thinking when he dreamed up this story.  It’s all flash and no substance.  What are the themes?  What is it really about?  Is it just a film exercise meant to be a scary movie.

Two things really hurt The Order.  First, the special effects and fantasy, horror, supernatural elements seem tacked on, as if the studio knew that people would not go for some religious mystery thriller if there wasn’t some unholy bump in the night going on.  Secondly, the actors, except for a few, spare moments, are pitiful.  They lack energy and seem lethargic or drugged.  Speaking accents and dialects are plentiful, but no actor is consistent.  Each one seems to grab whatever accent works for the moment, as if he or she will simply try everything in hopes that something will stick.

If you’re looking for a hardcore horror movie, this isn’t it.  If you like mystery and religious conspiracies, this isn’t a totally bad way to spend VCR time.

Posted by Leroy Douresseaux at 7:30 AM