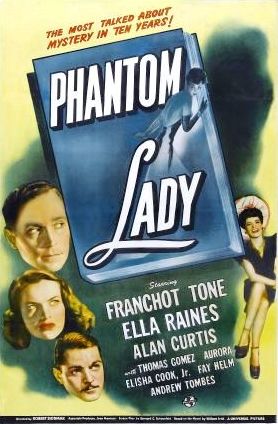 CRIME/FILM-NOIR/MYSTERY with elements of a drama, romance, and thriller

The subject of this movie review is Phantom Lady, a 1944 film noir and crime and mystery film from director Robert Soidmak.  This film is based on the 1942 crime novel, Phantom Lady, which was written by author Cornell Woolrich and published under his pseudonym, William Irish.  Phantom Lady the film follows a secretary who risks her life trying to find an elusive woman that may be able to prove that her boss did not murder his selfish wife.

Although photographing a film in black and white was not an artistic choice but a matter of being the only choice for many directors during Hollywood’s Golden Era of the 1930’s and 40’s, some directors took advantage of black and white cinematography to create some of the most compelling and beautiful looking films in movie history.  Case in point:  German-born director Robert Soidmak took a Universal Studios B film, Phantom Lady, and turned it into a work of black and white movie art.

In the film, unhappily married Scott Henderson (Alan Curtis) takes a woman wearing a strange hat for a night on the town, but the woman insists that the two remain on a no-name basis for this one-night only date.  However, Scott’s wife is found strangled in their apartment, and Scott takes the rap for it because he has no alibi.  No matter how hard he and the police look, they can’t find the mysterious woman with whom he spent an anonymous date, and everyone whom Scott claims saw him and the woman together only remembers Scott being alone.

When Scott is convicted of the murder and sent to death row, his loyal secretary, Carol Richman (Ella Raines), and Inspector Burgess (Thomas Gomez), the policeman who has a change of heart about Scott, begin another search to find the mystery woman.  Someone, however, doesn’t want them to find the woman and actively interferes in the case with deadly consequences.

Phantom Lady is mostly a curiosity; it has a few good moments, and while it falls far short of being forgettable, it’s not really memorable.  Siodmak and his cinematography Woody Bredell compose countless exquisite black and white shots, staging the first three quarters of the film as if it were a series of artsy photographs.  While the look is classic film noir, the meat of the story is low rent noir.  The story stumbles towards an end, and the hammy killer, replete with pseudo psychological reasons for his killer tendencies, doesn’t help.  The cast is strikingly B movie, being made of character actors – most of them solid, except for Ella Raines’ wildly inconsistent performance.  Look for a nice sequence featuring Elisha Cook, Jr. (the "gunsel" from The Maltese Falcon) and Ms. Raines that is rife with overt and almost raw sexual energy.  Overall, this is mainly for those who love film-noir mysteries and crime dramas, but there’s little else for the average-Joe film fan.


Posted by Leroy Douresseaux at 9:10 AM