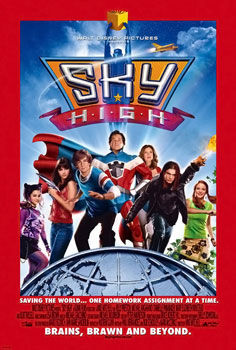 The subject of this movie review is Sky High, a 2005 superhero family film from Walt Disney Pictures.  Set in a world where superheroes are a common thing, Sky High follows a young superhero who struggles with being a normal teenager and with following in the footsteps of his parents, the world’s greatest superhero duo.

Will Stronghold (Michael Angarano) is the teenaged-son of Steve (Kurt Russell) and Josie Stronghold (Kelly Preston), who also happen to be the world’s greatest superhero duo, The Commander (Russell) and Jetstream (Ms. Preston).  Will is about to enter the freshmen class of Sky High, the first and only high school for kids with super powers.  The problem for Will is that puberty has not brought about the onset of any powers, so not only does he have to deal with the typical high school problems:  bullies, cliques, and teachers, but he also has to deal his father Steve, who has very high expectations for his son – a son who has no super powers.

The superhero teaching method at Sky High divides the students into two groups, “Heroes” and “Sidekicks.”  Not having any powers gets Will into the latter group, but he fits right in because his loyal childhood friend, Layla (Danielle Panabaker), is also a Sidekick.  However, Will still has to deal with his intimidating gym teacher, Coach Boomer (Bruce Campbell), and Warren Peace (Steven Strait), the son of a villain his father locked up long ago, and Peace, who can generate fire, plans on taking out his frustration about his father on Will.

Will does eventually find his powers, but it goes to his head.  His ego is much inflated when Gwen Grayson (Mary Elizabeth Winstead), a popular senior and head of the senior prom committee, chooses him as her prom date.  A dark villain, however, lurks somewhere in the shadows, seeking revenge against The Commander and Sky High, and Will just may be the key to the villain’s success or the savior of Sky High.

Sky High is in the tradition of the Walt Disney family films situated in fantastic settings or featuring characters that unwittingly encounter magic or the fantastic – films like 20,000 Leagues Under the Sea and The Shaggy Dog, or even Disney’s My Favorite Martian, their mid-90’s film version of the fondly remembered TV show.  In fact, Sky High’s special effects are still on the level of My Favorite Martian.  Both Sky High’s concept and final product are basically the kind of thing we’d get from The Disney Channel, but with a bigger budget and with the cast made of actors best known for their film roles, even if most of them are character actors, cult figures, and B and C-list stars.

That is much of the film’s charm – it’s cast.  Some critics and the Walt Disney Company’s publicity has described this as a cross between the Harry Potter series and the Disney/Pixar animated film, The Incredibles, but Sky High lacks the engaging characters and enthralling storytelling of the former and the spectacularly genuine superhero fantasy of the latter.  Basically, Sky High is a cheapie version of superheroes; it lacks the grandeur of classic superhero comics like the Fantastic Four, X-Men, Superman, and Spider-Man (which is something The Incredibles had), all of which have themes similar to Sky High.  The script doesn’t pave any new paths in the sub-genre of high school films, but instead follows the same road as most pedestrian fare set in high schools.  The plot is so predictable that you can see the happy ending and discover who the villains are before the midway point of the film.

However, Sky High (as stated earlier) has a good cast, and it has a good player in its lead character, Will Stronghold, superbly played by Michael Angarano in the teen-angst/awkward teen mode that dominates Disney Channel TV shows and television movies.  Angarano can play it all:  awkward, shy, bold, confident, jerk, hero, loyal son, and friend; he gives Will Stronghold the kind of dimension a lead character needs to sell a film to an audience.  Look for small, but nicely comic roles by “The Kids in the Hall” alums Dave Foley as The Commander’s old sidekick, All American Boy, and Kevin McDonald as Mr. Medulla, the science teacher with the big head that holds a giant and super smart brain.  On the other hand, Kurt Russell and Kelly Preston as Will’s parents are cardboard cutouts with only a few moments where they seem like real parents.

Overall, Sky High is a light, funny fantasy film in the tradition of G and PG-rated family fare that Disney does so well – perfect for the kiddies and grown folks who take this light-hearted fare for what it is.