Review: "Anything Else" is Familiar Woody Allen 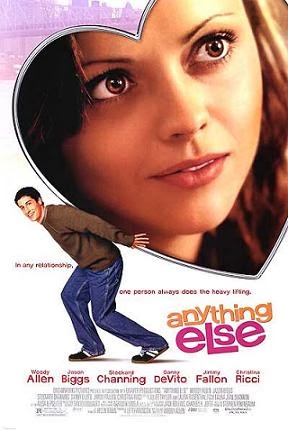 The subject of this movie review is Anything Else, a 2003 romantic comedy from writer-director Woody Allen.  The film is a contemporary romantic comedy set in New York City and follows an older guy as he guides his younger protégé through a messy and hilarious love story.

Woody Allen’s Anything Else is a movie about two relationships.  First, there is the friendship between an aged, aspiring comedy writer, David Dobel (Woody Allen), and a young, struggling comedy writer, Jerry Falk (Jason Biggs, American Pie).  Dobel is apparently severely paranoid, but he dispenses much wisdom and advice to Falk, who is in the middle of a messy situation.  That situation is the second relationship upon which the film focuses.  Falk is deeply in love with Amanda (Christina Ricci), a young actress who is insecure about her weight, among others things.  Amanda also claims to be uptight and insecure about her relationship with Jerry, but she may only be using that as a cover for having one or several affairs.

Anything Else isn’t among Allen’s best work, but it’s better than his least work – sort of in the middle.  It’s intermittently funny, sometimes outrageous, but too often dull and dry.  Allen’s dialogue, is as usual, crackling, but it takes almost half the film before the witty repartee begins to flow.  When Allen is not the lead in his film or if he’s not in his film, he usually has another character stand in for him.  While Allen is in Anything Else as David Dobel, Jason Biggs’ Jerry Falk is the Woody character or character type we’ve seen in films like Annie Hall or Manhattan.  Biggs does a passable job in this role, but that’s all; thankfully Woody is so good at writing himself, even for other actors to play, that the film doesn’t fall apart.  But nor does it ever really come together as anything more than several scenes that would make good exercises for an acting class.

Christina Ricci steals the show, although her performance takes a bit of time to get going.  Despite its obvious flaws, Anything Else is worth seeing, not only for Allen fans, but also for fans of Ms. Ricci.