Review: "The Chronicles of Riddick: Dark Fury" Fast and Furious 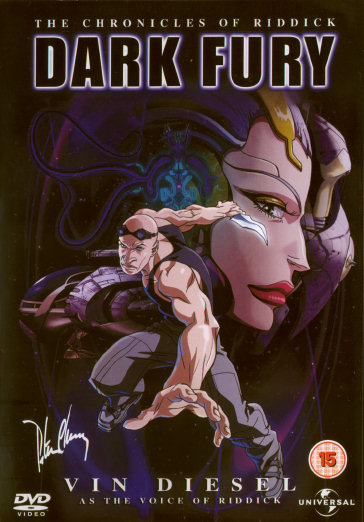 The Chronicles of Riddick: Dark Fury takes place shortly after the events depicted in Pitch Black.  The last survivors of the Hunter-Gratzner spacecraft:  Richard B. Riddick (Vin Diesel), Jack (Rhiana Griffith), and Imam Abu al-Walid (Keith David), are aboard the shuttle they used to leave the planet upon which the transport ship crashed.

They find themselves the target of a Mercenary spacecraft (“Merc ship”), after the mercenaries realize that Riddick, a wanted man with a huge bounty on his head, is aboard the shuttle.  Riddick discovers that he has piqued the interest of Antonia Chillingsworth (Tress MacNeille), the Merc ship’s owner, and this crazy woman has some crazy plans in store for Riddick.

The voice acting is also superb.  Whatever Vin Diesel may lack as an actor in live-action films, he has as a voice actor for an animated character:  nuance, affect, and richness and the ability to create a depth of character.  It goes without saying that Keith David is good, and Rhiana Griffith makes Jack a lively character that brings energy to Dark Fury every time she opens her mouth.

Dark Fury is further proof that Peter Chung is one of the true visionary animators, character designers, and directors of animated film of the last quarter-century.  Dark Fury needs a buddy.  There should be more animated Riddick films or maybe a television series, especially if Chung were to be the hands guiding animated (or anime) Riddick.  No Riddick fan should miss The Chronicles of Riddick: Dark Fury.


Posted by Leroy Douresseaux at 7:16 AM