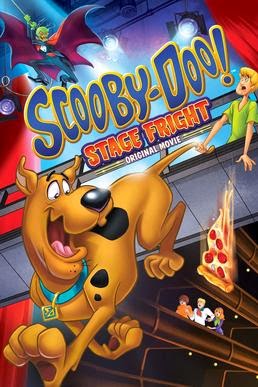 Scooby-Doo! Stage Fright is the 20th animated movie in the Scooby-Doo straight-to-video series from Warner Bros. Animation.  This series began in 1998 with Scooby-Doo on Zombie Island.  In Stage Fright, the Mystery Inc. gang tries to solve the mystery of a talent show plagued by a belligerent phantom.

Scooby-Doo! Stage Fright finds Mystery Inc.:  Shaggy Rogers (Matthew Lillard), Fred Jones (Frank Welker), Daphne Blake (Grey DeLisle), Velma Dinkley (Mindy Cohn), and, of course, Scooby-Doo (Frank Welker) heading to Chicago for a talent show.  The Windy City is the home of a hot competition reality show called, “Talent Star.”  Fred and Daphne are Talent Star finalists as a singer-songwriter duo.  Shaggy and Scooby do not want to be left out and have a secret act in the works, which they hope will help them storm their way into the finals.  Velma just wants to visit the city’s museums, one of which is exhibiting the legendary “Soap Diamond.”

However, Talent Star is being broadcast from an old opera house with a haunted history.  Now, The Phantom, the horror that plagued the opera house decades ago, is back to curse Talent Star.  Who or what is The Phantom?  The Mystery Inc. gang has a lot of suspects.  Among the many suspects are Talent Star’s publicity-obsessed host, Brick Pimiento (Wayne Brady); the fussy germ-a-phobic stage manager, Dewey Ottoman (Peter MacNicol); stage parents, Barb and Lance Damon (Candi Milo and Troy Baker), whose bratty daughter, Chrissy (Ariel Winter), is a finalist; and the scary and abrasive diva, singer Lotte Lavoie (Vivica A. Fox).

After twenty movies, one would think that this franchise could not offer any more surprises, but Scooby-Doo! Stage Fright does.  For one thing, there are several characters that could be the villain, and a few of them are actually villainous or could be described as an adversary, antagonist, or a general bad actor in the affair.  The story nicely mixes the classic story, The Phantom of the Opera (which originated in the novel by French writer, Gaston Leroux), and elements of the popular television series, “American Idol.”

Those are the things that kept me interested in this movie.  This is how I generally judge Scooby-Doo straight-to-video movies; if by the end of the film I actually wish it wouldn’t end, I consider that one to be a winner.

Scooby-Doo! Stage Fright is a winner.  In addition to the usual good voice acting by the main cast, Wayne Brady, Vivica A. Fox, and Peter MacNicol, in supporting roles, bring their characters to life in a way that makes them and the film a little more interesting to adults.  In fact, as a sidebar, this film does lampoon self-absorbed child stars and the stage parents who make the little monsters.  I think that fans of this film series and fans of Scooby-Doo will like Scooby-Doo! Stage Fright.


Posted by Leroy Douresseaux at 7:11 AM