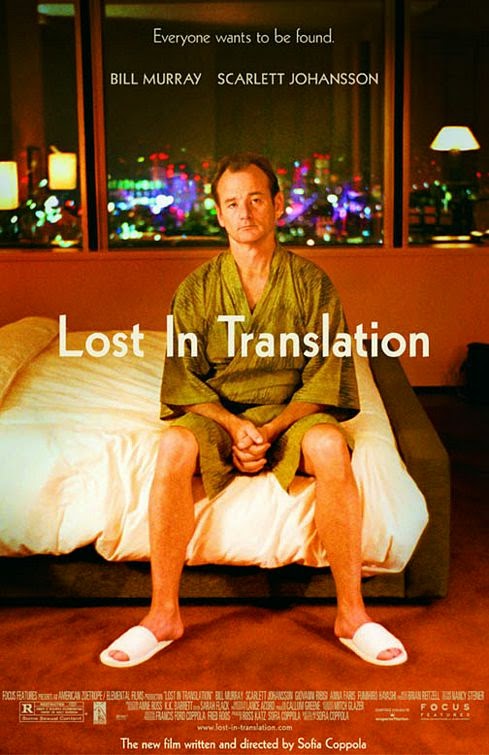 DRAMA/ROMANCE with some elements of comedy

The subject of this movie review is Lost in Translation, a 2003 drama and romantic film from writer-director Sofia Coppola.  Sofia’s legendary filmmaker father, Francis Ford Coppola, is also this film’s executive producer.

In 1990, film critics howled in derision when director Francis Ford Coppola cast his daughter, Sofia, in The Godfather: Part III, when another actress had to drop out early in filming schedule.  Over a decade later, Sofia Coppola has firmly established herself as a directorial talent to watch thanks to her excellent film, Lost In Translation, the story of two displaced Americans in Tokyo who form a unique friendship of platonic love.

Bob Harris (Bill Murray) is a fading TV star who goes to Tokyo after he’s paid $2 million to appear in an ad for Suntory whiskey.  Charlotte (Scarlett Johansson) is in Tokyo with her husband, John (Giovanni Ribisi), who is photographing a rock band for a major magazine.  Bob and Charlotte spend most of their time stuck in a hotel.  Charlotte is frozen in her life, unsure of where her marriage is going and of what’s she going to do in life.  Bob’s marriage is kind of shaky as he goes through a midlife crisis.

Bob and Charlotte meet in a hotel bar and bond.  It’s that bond that helps them to deal with their feelings of confusion and loneliness, and in that special friendship, they share  the hilarity caused by the cultural and language differences they encounter in Tokyo.  They turn their time in a strange land into a wonderful and special week in Japan.

Lost in Translation was one of 2003’s best films.  It’s smartly written, beautifully photographed, and splendidly directed.  If there’s an adjective that suggests good, it belongs in descriptions of LiT.  There is a patience in the filmmaking that suggests the filmmakers allowed the film to come together in an organic fashion, each adding their talents in the correct measure.

Ms. Coppola is brilliant in the way she lets her stars carry the film.  She does her part to give LiT a unique visual look, something that suggests a documentary and an atmosphere of futurism.  If you’ve heard that Bill Murray is just doing himself in this movie, you’re hearing ignorant people.  Yes, Murray brings a lot of his personality to the role, but Bob Harris is mostly a stranger to us.  Bill builds the character before our eyes, showing us a character new and rich in possibilities, someone with whom we can sympathize.  Bill shows us just enough to know him and keeps enough hidden to make Bob mysterious and intriguing.

Ms. Johansson carries herself like a veteran actress of many films.  She’s beautiful, but she’s puts those good looks to more use than just being eye candy.  She’s subtle and crafty, and a lot of her character is revealed in her eyes, in the careful nuances of facial expressions, and in the understated movements of her slender, sexy frame.  She’s a movie star.

For people who are always looking for something different in film, this is it.  Lost in Translation is like sex, lies, and videotape or Reservoir Dogs, an early film in a director’s career that is more foreign than American, and announces the coming of a director who might just be a visionary.  Plus, it’s a great romantic movie, as good as any classic love story.


Posted by Leroy Douresseaux at 5:56 AM