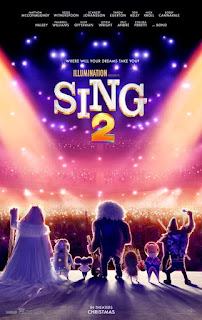 Sing 2 is a 2021 computer-animated, jukebox musical comedy film written and directed by Garth Jennings and produced by Illumination Entertainment.  It is a sequel to the 2016 animated film, Sing.  In Sing 2, the Moon Theater crew must persuade a media mogul and a reclusive rock star to believe in their new show.

Sing 2 opens some time after the events depicted in Sing.  Buster Moon the koala (Matthew McConaughey) and the rebuilt “Moon Theater” are thriving.  His latest goal is to impress Suki (Chelsea Peretti), a talent scout from Crystal Entertainment in Redshore City, but Suki is definitely not impressed with the stars of the theater.  So Buster leads his troupe:  Rosita (Reese Witherspoon), a housewife and mother of 25 piglets; Gunter (Nick Kroll), the exuberant pig performer who wants to dance as much as he wants to sing; Ash (Scarlett Johansson), the punk-rock porcupine and singer; Johnny (Taron Egerton), the teenage gorilla singer, and Meena (Tori Kelly), the shy teenage elephant singer, to their destiny in Redshore.

Once there, they infiltrate Crystal Tower Theater in order to get an audience with Jimmy Crystal (Bobby Cannavale), a white wolf and media mogul, but Crystal brushes them off.  Desperate, Buster starts making promises to Crystal.  The first is that he and his troupe can stage a massive space-themed musical, “Out of This World.”  Secondly, Buster says that he can get reclusive rock legend, Clay Calloway (Bono), to be part of his show.

The problem is that Calloway has not been seen in over fifteen years since his wife died.  Buster sends his secretary, Miss Crawly (Garth Jennings), to find him.  After Miss Crawly fails spectacularly, Buster's show is in trouble and his life is on the line with Jimmy Crystal.  Is there anyway or anyone that can save “Out of This World?”

I recently watched the original film, Sing, for the first time.  I found that all the obstacles that Buster and his troupe face in the original were all over the place and overkill, and I did not think that Matthew McConaughey's voice performance amounted to much.  McConaughey is better in Sing 2, but not great.  The conflict and obstacles that Buster and the Moon Theater troupe face are singularly focused or directly related to putting on their sci-fi show, “Out of This World.”

In Sing 2, I find the returning characters to be likable or more likable, perhaps, because I am now more familiar with then.  There are also some excellent new characters.  I hope Letitia Wright's Nooshy, a lynx and a street dancer who teaches Johnny to dance, returns if there is another film in the series.  Porsha Crystal (Halsey), Jimmy's daughter, actually grows as a character in the film.  Bobby Cannavale has a fine old time with his performance as Jimmy Crystal, and noted film director, Spike Jonze, is excellent as Jerry the cat, Jimmy's loyal and groveling assistant.  As Clay Calloway, Bono (of the legendary rock band, U2) doesn't sound like Bono, and his performance is mostly flat.

The film's big musical finale, the actual performance of “Out of This World,” is sweet and lovely, although it is a little over the top.  It is an excellent show-stopper, and serves as a nice send off for Buster Moon and his troupe – on to better things.  I hope that there is a third film in the series.  Watching the endearing Sing 2 reminded me of why I really love watching animated films, especially computer-animated films.  They are the warm cup of cocoa in my life as a movie lover.