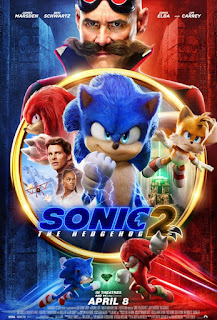 Sonic the Hedgehog 2 opens several months after the events depicted in Sonic the Hedgehog.  The mad scientist, Dr. Robotnik, also known as “Eggman” (Jim Carrey), is still trapped on the mushroom planet.  As luck would have it, his schemes to escape the planet draw the attention of Knuckles the Echidna (voice of Idris Elba), an anthropomorphic red echidna (a spiny anteater) warrior who possesses superhuman strength.

Meanwhile, Robotnik and Knuckles mutual adversary, Sonic the Hedgehog (voice of Ben Schwartz), is living in Seattle as the superhero, “Blue Justice.”  However, Sonic, an anthropomorphic blue hedgehog who can run at supersonic speeds, is not really good at being a superhero.  Tom (James Marsden) and Maddie Wachowski (Tika Sumpter) adopted Sonic as their son, and Tom, as his father, advises Sonic to remain patient for the day his power will be needed.  Then, he and Maddie leave for Hawaii for the wedding of Maddie's sister, Rachel (Natasha Rothwell).

That leaves Sonic home alone for some fun, and he is having fun until Robotnik and Knuckles arrive, with the latter immediately attacking him.  Knuckles turns out to be a formidable fighter, and he also desires to honor his extinct tribe.  To do so, he must find the legendary “Master Emerald,” an ancient relic that allows anyone who possesses it to bend reality to their will.  Knuckles not only believes that the emerald is on Earth, but also that Sonic knows its secret location.

Sonic is rescued by Miles “Tails” Prower (voice of Colleen O'Shaughnessey), an anthropomorphic, two-tailed, yellow fox who idolizes Sonic and came to warn him about Knuckles.  Tails can fly by spinning his tails like a helicopter's blades.  Now, Sonic and Tails are on a race to keep Robotnik and Knuckles from locating the Master Emerald.  But can Sonic keep his parents, Tom and Maddie, from getting involved, and is that the right thing to do?

I must say that Sonic the Hedgehog 2 is much better than I thought it would be.  I must be honest and admit that early in the movie, I dozed off several times – because I was tired and it had already been a long day.  However, Sonic's second live-action film has many exciting scenes, and the special effects and CGI are really good.  Sonic the Hedgehog may be a kids' movie, but the visual effects (VFX) are as a good as most big event, tent pole movies made for adults.  Soon, I was into it, pretty much enthralled by the impressive VFX.

The character animation is top notch.  Sonic, Tails, and Knuckles are obviously CGI and animated characters, but the character animation gives them personality and character.  They don't look like stuffed animals with weird eyes that have come to life.  The voice acting is quite good, with Colleen O'Shaughnessey making Tails see like a real hero-worshiping boy who finally meets his idol, and Idris Elba sounds all tough guy as Knuckles.  Ben Schwartz brings Sonic to life as a fully developed film character.  Schwartz makes Sonic's doubts and dilemmas seem genuine, and Sonic's exuberance and Schwartz's voice performance shine through the narrative.  Here, Sonic is more movie star than video game character.

As for Jim Carrey, he is what he usually is as an actor:  the good, the bad, and ugly of a performer in constant over-the-top mode.  The rest of the live-action cast makes the best of their roles with James Marsden and Tika Sumpter seeming like real parents in love with their alien child.  Natasha Rothwell, as Maddie's sister, Rachel, is quite good at stealing scenes.

So after saying all that, it is obvious that I like Sonic the Hedgehog 2.  But will I see the first film...?

Posted by Leroy Douresseaux at 2:10 PM