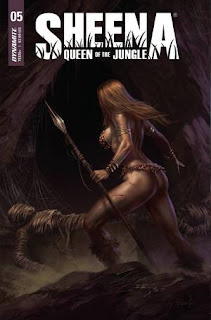 Dynamite began publishing Sheena comics in 2017 with a series that ran ten issues.  Dynamite is debuting a second series, Sheena: Queen of the Jungle, Volume 2.  It is written by Stephen Mooney; drawn by Jethro Morales; colored by Dinei Ribero; and lettered by Taylor Esposito.  The story finds Sheena investigating the strange goings on in “MegaPark,” Cardwell Industries' cutting-edge bio-dome in the middle of the jungle in Val Verde, South America.

Sheena: Queen of the Jungle, Volume 2 #5 opens with Sheena and Beatrice Toussaint, the skinwalker and manbo priestess of Obeah (Vodou), having infiltrated the inner workings of MegaPark.  It is all about to come crashing down as the hunters become the hunted and the hunted become the hunters.

Sheena struggles to maintain some kind of control over Beatrice, who is hunting humans as a monstrous cheetah.  Martin Ransome, the head of security of Cardwell Industries, is begging Sheena to find his kidnapped daughter, while he is determined to find her kidnapped animal friends:  Yaqua, Chim, and Pete.  And now, the real villain lurking behind it all with stand revealed and that may well spell the very doom of Sheena, Queen of the Jungle.

THE LOWDOWN:  In July 2021, Dynamite Entertainment's marketing department began providing me with PDF review copies of some of their titles.  One of them is Sheena: Queen of the Jungle Volume 2 #5, which is the fifth Dynamite Sheena comic book that I have read.

Sheena: Queen of the Jungle Volume 2 is one of my favorite Dynamite titles.  The entire creative team:  Stephen Mooney, Jethro Morales, Dinei Ribero; and Taylor Esposito is doing stellar work.  Now, they are bringing the first story arc to an end, and I must admit that I am sad that there is no hope for a bio-dome paradise.

I imagine that some of the dangling plot lines will survive this final chapter to haunt Sheena and the new writer, Steven de Souza, in the next story arc.  The ending is a bit darker than I expected, and with the big reveals, the sense of mystery is dissipated.  Still, I am glad that Sheena Volume 2 will continue.  This invigorating mix of Tarzan and Indiana Jones is a delightful adventure comic book.