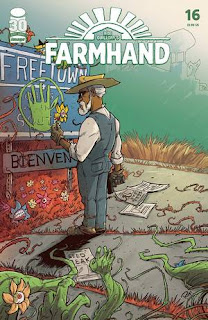 Farmhand sees Ezekiel “Zeke” Jenkins, a graphic designer and illustrator, return to his hometown of Freetown, Louisiana with his wife, Mae, and their children, Abigail and Riley.  Zeke's father, Jedidiah “Jed” Jenkins, and sister, Andrea (“Andy”), own and operate “Jenkins Family Farmaceutical Institute.”  Using stem cell biotechnology, the “farm” grows plant-based replacement human organs and tissue.  Once upon a time, transplant recipients saw this as a miracle.  Now, Zeke and the rest of the world see the miracle as a curse.

Farmhand #16 (“Fallow Earth”) opens with a once upon a time – a flashback to when Jedidiah first staked his claim, had his vision, created a miracle, and first watched it turn into an abomination.  Now, his ex-partner, Monica Thorne, is a demon who rules the world … perhaps.

She is certainly the power in what is left of Freetown and its inhabitants.  Everyone is infected with the “Jedidiah seed,” the transgenic seed that combines human and plant DNA to produce human organs capable of being grafted onto patients.  In addition, the Jenkins are also infected with family dysfunction, as Abigail finds herself caught in the cold war between her father and grandfather.  Happily, there is sanctuary … for now.

THE LOWDOWN:  It is exactly two years since Farmhand #15 arrived in comic book shops – just as the world was going into pandemic mode  I had not forgotten about Farmhand, but I had forgotten how much I really liked it.  This is a really and truly great comic book series.

For a long time, I thought of Farmhand as a kind of mix of the original version of “The Twilight Zone” television series and of Stephen King's dark fantasy fiction.  However, Farmhand has both grown and evolved, and while it retains the touches of Rod Serling and of King, it has become something else.  I won't call it dystopian or apocalyptic fiction, although there are elements of both.

It is metaphorical and allegorical, and I see that in Jed Jenkins, who has some Biblical level anger.  Still, for the first time, I really identify with him.  Like many Black men of a particular time, he has some scores to settle with the Jim Crow society a.k.a. American apartheid.  His fall begins when his struggle becomes narcissism and revenge.

Like King, Rob Guillory has fashioned a great man vs. evil struggle without losing the human drama.  Zeke, Jed, and the rest of the Jenkins got family problems, and Guillory won't let us escape them.  The characters' personalities, motivations, and conflicts read as genuine.  Farmhand is more than mere genre fiction because Rob's imagination gives his readers both an incalculable crypto-zoography and characters whose humanity rings as authentic and meaningful.

It is good to be down on the farm again.  I hope you give Farmhand a try, dear readers.

I READS YOU RECOMMENDS:  Fans of dark fantasy fiction of great comic books will want to be a Farmhand.

Posted by Leroy Douresseaux at 1:43 AM