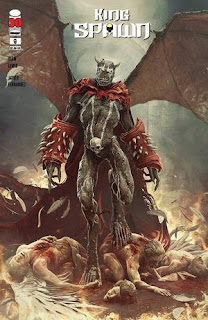 King Spawn is one of three recently launched comic book series that join the original series to form the “Spawn Universe.”  This series is written by Sean Lewis; drawn by Javi Fernandez with Thomas Nachlik ; colored by FCO Plascencia; lettered by Andworld Design.  King Spawn finds Spawn battling the members of a dark conspiracy that wants to force him to accept his crown.

King Spawn #9 opens in the wake of Spawn's battle with the Court of Priests.  Suddenly, Spawn finds himself in “the Green,” sent there by Black Azrael, the leader of the Court of Priests.  This confrontation with “Gaia,” the ruler of the Green means that the Hellspawn must fight her servants, including “The Heap.”  And Simon, one of the children who were of the victims of the religious movement, Psalms 137, has become “Simon the Kingslayer.”  And Spawn is a king to be slayed.

Now, Gaia presents Spawn with a chance to gain the one thing he has wanted ever since he returned to Earth as a Hellspawn.  But to get it means that he will have to do that which he really does not want to do – take “the God Throne.”

THE LOWDOWN:  King Spawn continues to be the best Spawn spin-off comic book to date.  It is a hybrid of dark fantasy, the supernatural, and superheroes, but the mixture is different with each issue.  Every issue of King Spawn is a surprise.  It's like a box of satanic chocolates; you never know which hellish delight you will get.

The late rapper-actor DMX said that it is dark and Hell is hot, and so is King Spawn.  In a series that has been dark and hot as Hell to date, writer Sean Lewis offers the most devastating so far.  Spawn can get what he wants, and the price is his destiny, which of course, he doesn't want.  It's simple as hell.

Fill-in artist Thomas Nachlik is tonally different from series regular artist, Javi Fernandez.  However Nachlik's painterly illustrations, with their fairy tale qualities, easily convey the really screwed up situation in which Spawn finds himself.  Nachlik's makes you believe in the hell of getting what you want and leaves readers with a great cliffhanger.

King Spawn continues to be the “king of crazy” in the “Spawn Universe.”  You know you want it, dear readers.  Just take the throne...

[This comic book includes “Spawning Ground” the “April Mailbag” of letters to the editor.]

Posted by Leroy Douresseaux at 3:29 AM