Comics Review: On the Streets of "KILLADELPHIA #21" 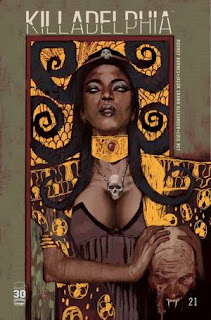 Killadelphia focuses on James “Jim” Sangster, Jr. and his father, revered Philadelphia homicide detective, James Sangster, Sr., thought to be dead.  He is actually a vampire.  Now father and son lead a ragtag team comprised of a medical examiner (Jose Padilla), a dead president, and a rebellious, but special young vampire (Tevin Thompkins a.k.a. “See Saw”) in a bid to save Philly from an ambitious and murderous former First Lady, Abigail Adams.

Killadelphia #21 (“The Truth”) finds Jose and the Zubiya werewolf pack out on a supply run.  The streets of Philadelphia may be mostly empty because of its vampire apocalypse, but those desperate enough for supplies are out in these streets.  In a ransacked pharmacy, Jose meets some of them, and before long, she the peacemaker between two packs – werewolf and predatory humans.

Meanwhile, See Saw is at a crossroads.  The young vampire is tired of dealing with all the lies he's been told.  Now, George Washington has brought someone who can tell the young blood a new story.  Meet Aelio and hare his tale of “the Eterna.”

THE LOWDOWN:  We are in the middle of Killadelphia's fourth story arc, “The End of All.”  It is outta sight, and individually, so is Chapter Three, which resides under Jason Shawn Alexander's Gustav Klimt-inspired cover.

Writer Rodney Barnes is a writer and executive producer on HBO's event series, “Winning Time: The Rise of the Lakers Dynasty.”  In Killadelphia, he plumbs the depths of America's original dynasties, in all their layers of secrets, lies, sins, and hidden truths.  One half of issue #21 offers what feels like a much needed happy ending.  The other half presents one of those wonderful Killadelphia histories – an alternative history of magic, mysticism, and secret things.  The truth, as Barnes gives it to us, is always fun to read, although this is the kind of thing that will eventually get Killadelphia labeled “CRT,”
… or woke … or politically correct...

I am always happy to see series artist and co-creator Jason Shawn Alexander and his team draw werewolves.  I may have stated previously that Killadelphia and its connecting series have some of the best drawn werewolves since the late Bernie Wrightson drew them for Stephen King's Cycle of the Werewolf.

Overall, the graphical storytelling here is quite good.  Here, series of still illustrations come together and flow like moving pictures of shifting moods and settings.  Even within the back story and history, the art gives a sense of change and of time passing.  The heart of Killadelphia is the changing story and the mercurial narrative, and in that, Killadelphia will tell its the truth … or maybe many truths.

Read this issue, dear readers, and discover why other readers are finding their way to Killadelphia – loving it and thirsting for it.

Posted by Leroy Douresseaux at 5:05 PM