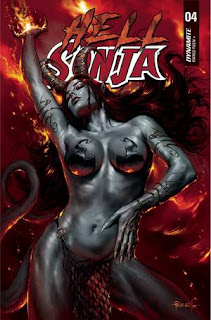 Red Sonja remained a fixture in comic books from then until about 1986.  In 2005, Dynamite Entertainment began publishing comic books featuring differing versions of the character.  One of those is a spin-off title, Hell Sonja.  The series is written by Christopher Hastings; drawn by Pasquale Qualano; colored by Ellie Wright and Kike J. Diaz; and lettered by Jeff Eckleberry.  The series focuses on Hell Sonja, who intercepts the prayers of the desperate and then, sends her team of champions (strike team) to fill Hell's belly with would-be conquerors and those most deserving of its punishment.

Hell Sonja #4 opens in the realm of Hell Sonja.  A recent battle has left her weak... and paranoid.  Now, she refuses to divulge mission-pertinent information to her strike team, before sending them off on an impossible mission

So Red Sonja, Blue Sonja, Moon Sonja, and Gold Sonja find themselves trapped on a modern day airliner.  It is mid-flight and somewhere aboard is the soul meal that will rejuvenate Hell Sonja.  Well, there is more to the story … and it might involve Hell Sonja's predecessor.

THE LOWDOWN:   In July 2021, Dynamite Entertainment's marketing department began providing me with PDF review copies of some of their titles.  One of them is Hell Sonja #4, which is one of several Red Sonja-related comic books that I have read

Hell Sonja #4 finds writer Christopher Hastings' revealing the inner workings of the universe of this series.  You, dear readers, might call this a “mythology issue,” since it reveals some of the supernatural figures behind the scenes and beyond Hell Sonja.

Artist Pasquale Qualano and colorist Kike J. Diaz create a surreal, cotton candy kaleidoscope of colors that conveys the surreal nature of this story with its kooky cooking shows and WandaVision flavorings.  Together Qualano and Diaz create storytelling that confuses the readers – because that is the way that they are supposed to feel – at least while reading this fourth issue.  After all, the anticipation of some answers will make us come back for the fifth issue.

Posted by Leroy Douresseaux at 9:48 PM