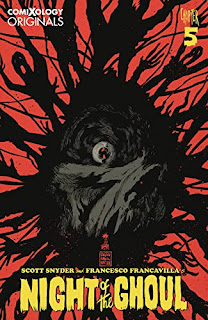 NIGHT OF THE GHOUL #5 (OF 6)
comiXology/Best Jacket Press

Night of the Ghoul #5 opens with the Ghoul's acolytes, the Order of the Fly, in full attack mode.  Forest and Merritt have their backs against the wall, but Forest doesn't really have time to worry about himself.  He can hear the voice of his son calling to him, and Forest is shocked to discover that his son is trapped … underground.

Now, with Cora the nurse as their only allies, Forest and Merritt make a run for it.  Can Forest save Orson?  Can they escape Dr. Skeen and the thing inside him?

Meanwhile, in the past, Alex Powell and his allies try to save his father, Sgt. Kurt Powell of Eagle Company, from the thing inside him.  But here comes the Order of the Fly...

THE LOWDOWN:  In Night of the Ghoul, Francavilla and Snyder have created a masterpiece of atmospheric horror.  Every chapter, but this fifth chapter feels like writer Scott Snyder is padding the series so that it reaches six chapter/issues.

Luckily, every chapter of Night of the Ghoul is a chance to see the beautiful art of Francesco Francavilla and to read his powerful graphical storytelling.  For Episode 5, Francavilla creates a pace that carries the reader rapidly through this chapter.  Every page begins on the razor's wire and ends in a cliffhanger – at least it seems that way.  The underground sequence bleeds creepiness, so much so that I was ready to move past it.

Yes, I have a few quibbles.  Still, I can't wait to read the final chapter.

Posted by Leroy Douresseaux at 8:30 PM