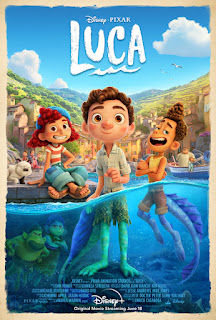 Luca is a 2021 computer-animated, coming-of-age, fantasy film directed by Enrico Casarosa, produced by Pixar Animation Studios, and distributed by Walt Disney Studios Motion Pictures.  The film focuses on a two sea monster boys disguised as humans and the human girl they befriend.

Luca opens sometime in the 1950s in and around the Italian Riviera.  Below the surface of the waters of the Riviera live a group of sea monsters.  Luca Paguro (Jacob Tremblay), a timid young sea monster, herds goatfish below the coast of the small Italian town of Portorosso.  Luca is curious about the human world, but his parents, Daniela (Maya Rudolph) and Lorenzo Paguro (Jim Gaffigan), fear that the humans might hunt him for food.  Thus, they forbid him from approaching the surface.

One day, Luca meets Alberto Scorfano (Jack Dylan Grazer), a fellow sea monster boy who lives alone above the surface on Isola del Mare.  Alberto encourages Luca to venture out of the ocean, showing him that sea monsters turn into humans when their bodies become dry, but return to their true forms when they become wet.  Alberto invites Luca to his hideout where the boys connect and dream about owning a Vespa (an Italian luxury brand of scooter) so that they can travel the world.

Venturing into Portorosso as humans, the boys discover that a local children's triathlon, the “Portorosso Cup,” is about to take place.  They run afoul of Ercole Visconti (Saverio Raimondo), the local bully and five-time champion of the Portorosso Cup.  They also meet a young girl named Giulia Marcovaldo (Emma Berman), the daughter of a fisherman, Massimo Marcovaldo (Marco Barricelli).  Giulia has participated in the triathlon, but has never won.  Hoping to win the money they need to buy a Vespa, Luca and Alberto form a team with Giulia.  Through Giulia, Luca learns that there is so much more to the surface world, but his feelings for her threaten everything, including his plans with Alberto.

I could say that Luca is one of Pixar's most beautiful films, and I will, although that is redundant.  Pixar's films always have beautiful visuals, and sometimes they are stunning and a wonder to behold.  The film is drenched in the bright colors of the Italian Riviera and reinterprets them as if they were watercolor paintings.

Dear readers, perhaps you are familiar with the animated films of the Japanese master, Hayao Miyazaki.  His films are a symphony of wondrous colors and stunning locales, and those films clearly have an influence on Luca on a number of levels, especially in terms of visuals and in the tone of the story.  Luca's town of Portorosso may be named in honor of Miyazaki's 1992 animated film, Porco Rosso, which is also set in Italy.

I think the elements that really drive this film, its beauty aside, are the characters and voice performances.  The characters are very well developed:  their personalities, their goals, and fears.  From Alberto's jealousy and fear of loss to Giulia's determination and open-mindedness, the viewer can believe in these characters.  Luca is ostensibly a coming-of-age story focusing on Luca.  His sense of adventure is overcome by his fear of trying new things, whether it is actually going to the surface world or going to school.  In Luca, we see the film's themes of acceptance (accepting others, accepting help, and accepting oneself) and overcoming fear (especially the fear of change).  Luca takes on a beautiful journey as we see the evolution of the title character, and as for the coming-of-age angle, this film feels like only the first chapter of Luca's coming of age.

Dan Romer's beautiful score highlights and accentuates the journey of change and evolution that is Luca, both the film and the character.  Luca is one of Pixar's most convincing boy characters, which is quite a feat in a filmography full of wonderfully drawn characters.  Speaking of drawn, the character design and art direction and production design are on par with Pixar's best.

I always thought that I would like Luca, and now that I have seen it, I am in love with it.  For me, Luca is one of Pixar's best ever films, and it is one of 2021's very best films  I recommend it without reservation; everyone should see it.