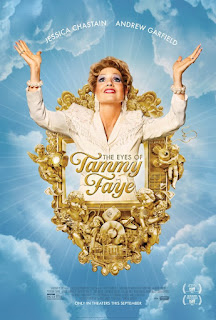 The Eyes of Tammy Faye introduces young Tamara Faye LaValley (Chandler Head) in the year 1952.  Growing up in a religious community in International Falls, Minnesota, Tammy is an outcast because her mother, Rachel Grover (Cherry Jones), divorced Tammy's father.  Although she is now married to Fred Grover (Fredric Lehne), Rachel believes that she is seen by some as a harlot.  She hides Tammy in order to hide her shame.  However, young Tammy Faye ain't having none of that and inserts herself into the church.  The parishioners become attracted to the way she speaks Biblical scripture and the way in which she “speaks in tongues.”

In 1960, while attending North Central Bible College in Minneapolis Minnesota, Tammy (Jessica Chastain) meets and falls in love with fellow college student, Jim Bakker (Andrew Garfield).  In 1961, the two marry and drop out of college.  They drive around the United States to preach and inspire Christian communities, with Jim preaching and Tammy singing and playing with puppets for children.  Seeking to create and have control over their own programs, the couple create “The PTL Club,” the flagship show of their PTL Satellite Network.  Tammy Faye and Jim Bakker become increasingly popular over the years, but with fame comes more money and more secrets and lies.  Can Jim and Tammy Faye save themselves with the success in which they save souls?

The Eyes of Tammy Faye is about Tammy Faye LaValley/Bakker/Messner, and as Tammy Faye, Jessica Chastain gives the performance of her career.  That is saying a lot, as Chastain's career is filled with bravura performances, except for her god-awful turn in 2019's (X-Men:) Dark Phoenix.  Chastain, who recently won a “Best Actress” Oscar for this performance, buries herself in the work of this film's make-up and hairstyling artists (who also won and Oscar) and reemerges as an attractive and alluring fictional version of the real life Tammy Faye.  I couldn't stop watching her, believing in her, and seeing Chastain's Tammy Faye as a real person that I wanted to think about for the entire run time of this film.

It is a testament to Andrew Garfield's acting skills that he created space in this film for Jim Bakker.  Garfield makes his Bakker a hollow man who is beset by greed and full of hypocrisy.  He condemns Tammy's minor infidelity while hiding three decades of homosexual dalliances and affairs.  Garfield's Bakker, however, can survive in the vortex that is Chastain's Tammy Faye.

The script presents Tammy as having good intentions, as being loving, and as being naive.  Jim Bakker is in love with himself and with money and fame as much as he loves God.  The story suggests that Jim's faults make the couple vulnerable to opportunists and predators, such as Jerry Faldwell, whom actor Vincent D'Onofrio portrays as some kind of evangelical crime lord.  On the other hand, the film suggests that Tammy Faye's ignorance and unwillingness to speak up at certain times contribute to her unwillingness or inability to pay heed to the warnings of Rachel, her mother.  Rachel is played by Cherry Jones in an excellent performance that would have been noticed more if it weren't in the shadow of Chastain's.

Director Michael Showalter takes the fine performances of his cast and makes a movie that is the epic as character drama.  He gives us the rise and the fall and the (somewhat) redemption of a woman who had a moment in time that ultimately trapped her in the public sphere as a figure worthy of mocking.  To me, The Eyes of Tammy Faye is saying that she did not deserve this, but I remember her as someone who deserved some of the derision pointed her way.  As the guiding force of The Eyes of Tammy Faye, Jessica Chastain deserves all the praise and awards pointed her way.

Posted by Leroy Douresseaux at 11:22 AM