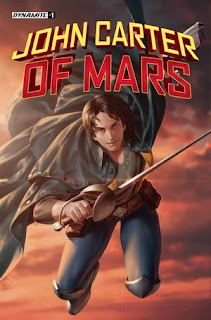 John Carter is a character that first appeared in the serialized novel, Under the Moons of Mars (The All-Story, 1912), written by Tarzan creator, Edgar Rice Burroughs.  When it was first collected and published in hardcover, the novel was re-titled, A Princess of Mars (1917), the first of Burroughs' “Barsoom” novels, which were set on Barsoom, a fictional version of Mars.

John Carter is a Confederate veteran of the American Civil War who is transported to Mars via “astral projection.”  There he gets a new body that is similar to the one he leaves behind on Earth.  John makes several trips back and forth between Earth (which the Martians call “Jasoom”) and Barsoom, and Dejah and John are married and have two children.

John Carter of Mars #1 opens on Barsoom.  John Carter is enjoying his reward – domestic life with his wife, Dejah Thoris (the Princess of Mars), and their son.  Suddenly, for the first time in ages, he is whisked back to Earth, but he isn't the only one.  It is 1919, and Carter is back in his old mansion estate.  There, he finds himself in a fierce battle with Green Martians that have also been transported to Earth.  And they are determined to make trophies of his head and limbs.

Meanwhile, a young Black U.S. Army officer, Lt. Fred Hines, and his friend, Charlie, have arrived at the estate to investigate the disappearance of his wife, Thai, a Civil War historian who has studied John Carter's journals.  She is also one of the humans missing on Earth that may have been transported to Mars.  Fred and Charlie are shocked to find John Carter alive and fighting for his life, a fight they must now join.

THE LOWDOWN:  In July 2021, Dynamite Entertainment's marketing department began providing me with PDF review copies of some of their titles.  One of them is John Carter of Mars #1.  It is the first solo Dynamite John Carter comic book that I have read.

Simply put, writer Chuck Brown has created in John Carter of Mars #1 the kind of comic book that I could not stop reading.  What a blast!  It may be the freshest take on John Carter, if not ever, then, in a long time.  Brown simultaneously reinvents Burroughs influential series and also may well revitalize interest in it.  Brown has also created a comic book that can be enjoyed by many ages – from middle school to old school readers.

George Kambadais's art and coloring remind me of the work of Bruce Timm, and the graphical storytelling hops from one page to another like a lit fuse.  It has a classic comics feel with a sense of wonder and mystery.  My only complaint is that I wish I could see Kambadais' work for issue #2 now, so, of course, I am highly recommending John Carter of Mars.

Posted by Leroy Douresseaux at 9:58 PM