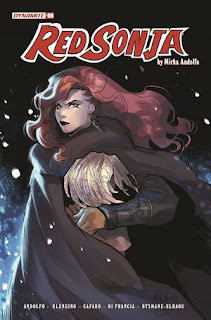 Red Sonja remained a fixture in comic books from then until about 1986.  There have been several ongoing Red Sonja comic book series, and the latest, Red Sonja Volume 6, is under the guidance of popular Italian comic book creator, Mirka Andolfo.  It is written by Andolfo and Luca Blengino; drawn by Giuseppe Cafaro; colored by Chiara Di Francia; and lettered by Hassan Otsmane-Elhaou and Jeff Eckleberry.  In this new series, Red Sonja accepts the bounty to bring a girl named “Sitha” to a broker who will send her to her true home (Kithai).  The girl, however, becomes attached to Sonja and calls her mother and an adventure begins.

Red Sonja Volume 6 #8 opens in the fortress of Baroness Drang, ruler of the village of the “Feud of the Seven Gallows.”  Sonja, Sitha, and Kebra, the 16-year-old thief who has befriended Sitha, prepare to make their escape.  But the Baroness' dark secrets have been revealed, and she is not about to let her new prisoners escape with them.  So it is time for the Baroness to learn why Red Sonja is the “She-Devil with a Sword.”

Next, what seemed like a luxury trip turns dangerous.  Then, even more danger comes.

THE LOWDOWN:   In July 2021, Dynamite Entertainment's marketing department began providing me with PDF review copies of some of their titles.  One of them is Red Sonja Volume 6 #8 which is the latest of several Dynamite Entertainment Red Sonja comic books that I have read.  This is also only the tenth issue of a Mirka Andolfo comic book that I have read.

As I I have written in previous reviews:  I admire that Andolfo and Luca Blengino have managed to extend this story past the point that I thought they reasonable could.  Their Red Sonja series is an epic adventure and hints at a probable dark ending.

Artist Giuseppe Cafaro continues to capture the shifting settings and plots that define this series.  With Cafaro changeable illustrations and graphical storytelling, Red Sonja carries on from one crisis to the next on a perilous but fun to read adventure.  Cafaro captures the intense emotions in a energetic way that plays to the sudden violence of sword and sorcery.  This Red Sonja is worth following.

Posted by Leroy Douresseaux at 2:46 PM