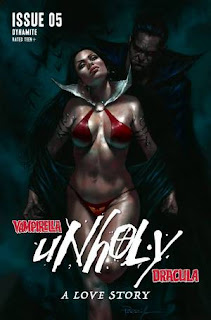 In 2010, Dynamite Entertainment obtained the character and has been publishing new Vampirella material since then.  Dynamite's latest Vampirella comic book series is a follow-up to the recently concluded Vampirella Volume 5 and is entitled Vampirella Dracula Unholy.  The new series is written by Christopher Priest; drawn by Donny Hadiwidjaja; colored by Mohan; and lettered by Willie Schubert.  The series follows Vampirella and her new husband, FBI Agent Mathias “Matt” Ecsed, who carries the “Dracula virus,” which might allow Dracula to return.

Vampirella Dracula Unholy Volume 1 #5 (“Homeland”) opens at the New York Presbyterian Hospital in Queens.  There is a body on the floor, and NYPD is looking at Matt and Vampirella as the killers.

Meanwhile, Vampirella's efforts to save Matt, the man she loves have completely collapsed.  Dracula's back, and he has found a new friend, Matt's (former) lover, Eriq.  Yes, Matt is gay and the cops are calling him a “fruit cake.”  Dracula has a new human host, and he wants the return of his empire.  He wants to be the “Lord of All Ages.”  Can anyone stop him?  Can Vampirella and Matt's unholy love survive the coming battle?

THE LOWDOWN:  In July 2021, Dynamite Entertainment's marketing department began providing me with PDF review copies of some of their titles.  One of them is Vampirella Dracula Unholy #5.  It is one of many Vampirella comic books that have engaged my imagination these last few months.

Just like he is killing it with Draculina, writer Christopher Priest killing it with excellent characters in the surprisingly thrilling Vampirella Dracula Unholy.  It looks like the series may end with the next issue, the sixth, which would be a shame.  I find it hard to believe that Priest can wrap up this delightful tangle of characters in just one more issue, but we'll see.

Artist Donny Hadiwidjaja translates Priest's dark and moody storytelling into even darker and moodier comic book or graphical storytelling.  Hadiwidjaja makes it fun to have Dracula in a comic book with his own spin on bloodsuckers and contagions.  He also deftly captures the mean spirits of Priest's edgy characterizations.  I highly recommend this series for however long it lasts.