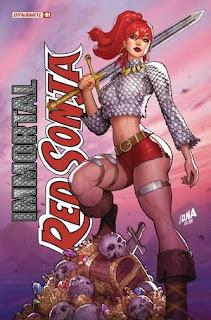 In 2005, Dynamite Entertainment began publishing comic books featuring differing versions of the character.  The latest is Immortal Red Sonja.  It is written by Dan Abnett; drawn by Alessandro Miracolo; colored by Ellie Wright; and lettered by Jeff Eckleberry.  The series is set in the Britain of legend and finds Red Sonja wearing cursed chain mail and forced to save a fallen kingdom.

As Immortal Red Sonja #1 (The Last House) opens, Red Sonja is a weary traveler, riding her horse in the rain and seemingly talking to herself.  She arrives at a lonely place, seeking shelter, a roof, and a fire.  Lott, the master of this place called “The Last House,” offers that and food, but for a price.  Lott's price is a story, so Sonja tells him how she became a “She-Devil.”  But there is more to the Last House, to Lott, and to Sonja's story.  Her life and the fate of a lost kingdom rely on the whole story.

THE LOWDOWN:  In July 2021, Dynamite Entertainment's marketing department began providing me with PDF review copies of some of their titles.  One of them is Immortal Red Sonja #1, which is one of many, many Dynamite Red Sonja comic books that I have read.

I really don't want to spoil this first issue of Immortal Red Sonja, but as I write this review, I have just finished reading it.  As of now, I am calling it the best issue of a Dynamite Red Sonja comic book that I have ever read.  It may also be the best single Red Sonja comic book I have ever read.  Abnett's spin on the Arthurian legend is both imaginative and alluring.  He could run with this concept for years, and I'd probably be right behind him, trying to steal of glimpse of each issue before it arrives in stores.

Alessandro Miracolo's art and storytelling is mercurial and mystical.  He establishes an atmosphere of mystery that remains in place even when the story turns violent.  Miracolo seems to draw the vibe of magic and occultism into his very illustrations, but his Red Sonja is more practical and steady, less prone to blood lust.  Miracolo tells this story in a way that draws the reader in, and some, like me, may not want to leave.  Ellie Wright's potent colors and Jeff Eckleberry's precision lettering complete the effects of Miracolo's spell.

I highly recommend Immortal Red Sonja.  It is another Dynamite Red Sonja winner.