Review: "SYNCHRONIC" is a Fresh and Intriguing Take on Time Travel Movies 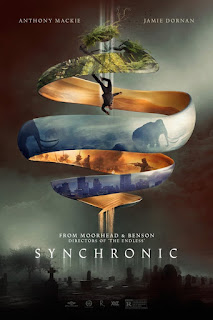 Synchronic is a 2020 science fiction and drama film directed by Justin Benson and Aaron Moorhead, also known as the team of Benson & Moorhead.  The film focuses on two paramedics who encounter a series of bizarre accidents and inexplicable deaths that are tied to a mysterious new designer drug, which has otherworldly side effects on its users.

Synchronic is set in New Orleans, Louisiana.  It introduces two paramedics, Steve Denube (Anthony Mackie) and Dennis Dannelly (Jamie Dornan), who are also longtime friends.  They begin to receive a series of emergency calls that turn out to be unusual or inexplicable.  In a hotel room, they find a young woman suffering from the bite of an Eastern diamondback rattlesnake, which is not native to Louisiana.  At a domestic abuse call, they find a man who has apparently been stabbed with something like a sword, and they later find an old sword embedded in the wall of another room.  At these emergency calls, Steve usually finds an empty package for a new designer drug known as “Synchronic.”

After being injured on the job, Steve, a sexually active ladies' man, has a routine blood test.  It reveals that he has a brain tumor near his pineal gland, which is unusually underdeveloped and non-calcified for a man his age.

Dennis is married to Tara (Kate Aselton) and has two children, including a now 18-year-old daughter, Brianna (Ally Ioannides).  Responding to an overdose call, Steve and Dennis find a dead boy and an intoxicated girl who tells them that Brianna was at their party.  Steve and Dennis can't find her, but Steve does find an empty Synchronic package near where Brianna was supposed to be sitting.  Investigating Synchronic, Steve learns that it alters the perception of time and can even allow some people to time travel.  Now, Steve begins the journey of a lifetime in hopes of finding Brianna somewhere in time before he runs out of time.

Synchronic is a modestly-budgeted independent film.  It is also a high-concept science fiction film based on the fantastic concept of a street drug that can allow humans – to one extent or another – experience time travel or time displacement.  I think the budget is what keeps this film from really flying with this concept.  Don't get me wrong, dear readers.  Benson & Moorhead take their audience to some interesting places in the past, and I imagine that they could do even more with this concept if it were a television/streaming series or miniseries.  I can say that they are definitely not shy about depicting how treacherous New Orleans was for a Black man in the past and even now.

To that end, Anthony Mackie gives a performance that is bigger than this film.  In fact, no element sells Synchronic's ideas and plots better than Mackie's performance.  The script kind of relegates Jamie Dornan to the sidelines, although Dennis Dannelly is surrounded by some intriguing family melodrama.  However, it is Mackie as Steve who does the heavy lifting and convinces the audience that Synchronic the drug and its amazing effects are an actual thing.

So this is my way of saying that Synchronic should not be lost to time.  Benson & Moorhead have created a concept that could be … dare I say it... timeless.  Honestly, I only decided to watch this film after learning that this duo was directing two episodes of the Disney+/Marvel Studios six-episode series, “Moon Knight.”  Now, I'm just glad I watched it, and I recommend it to film fans and movie lovers looking for offbeat, indie sci-film films.  And I hope for more in the world of Synchronic.

Posted by Leroy Douresseaux at 12:24 PM