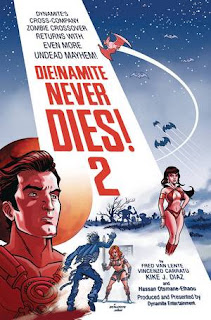 DIE!namite is a series of zombie apocalypse comics from Dynamite Entertainment that utilizes some of the publisher's most popular characters and licensed properties.  The latest is DIE!namite Never Dies!  It is written by Fred Van Lente; drawn by Vincenzo Carratu; colored by Kike J. Diaz; and lettered by Hassan Otsmane-Elhaou.  This time, Tarzan (John Clayton II, Viscount Greystoke) and Jane, his wife, join the cross-company zombie crossover.

Meanwhile, back on Earth, Vampirella, Evil Sonja, Pantha, and Jane battle to save Tarzan and Jane's home, the Uziri National Forest, from zombies – both human and dinosaurs!  So where is the Lord of the Jungle?  He is off-world.

On Barsoom (Mars), Tarzan has joined Carthoris, Jedwar of Helium and son of John Carter and Dejah Thoris, and Thuvia, Princess of Earth (Jasoom), in a battle to save Helium from a zombie invasion.

THE LOWDOWN:  In July 2021, Dynamite Entertainment's marketing department began providing me with PDF review copies of some of their titles.  One of them is DIE!namite Never Dies! Volume 3 #2.  It is only the fifth DIE!namite comic that I have read, although I've known of the series since it first began.

I didn't have much to say about DIE!namite Never Dies! Volume 3 #2.  It was like any other issue in this series that I've read … except that there was Tarzan, and I am a fan of the character.  For me, Tarzan brings something extra to the series.

Writer Fred Van Lente offered a first issue that intrigued me.  With this second issue, he offers an issue that has me sold on this series.  There are new characters, more subplots, another strange Martian city, and a dark secret in a jungle temple.  The art team of artist Vincenzo Carratu and colorist Kike J. Diaz present some pretty art that is clear and invigorating storytelling.

I READS YOU RECOMMENDS:  Fans of DIE!namite will want DIE!namite Never Dies! Volume 3.

Posted by Leroy Douresseaux at 2:08 PM