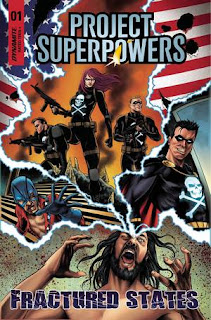 The characters return in the new comic book series, Project Superpowers: Fractured States Volume 1.  It is written by Ron Marz and Andy Lanning; drawn by Emilio Utrera; colored by Arthur Hesli; and lettered by Tom Napolitano.  The series focuses on a “John Doe,” who awakens in the mid twenty-first century to find the world turned upside down.  Does he bring salvation … or doom?

Project Superpowers: Fractured States Volume 1 #1 opens in the year 2052.  In Washington D.C., at the Lincoln Memorial, the Superpower known as The Flag is getting a beat down.  But is it all a dream?

A mysterious man awakens, unkempt, naked, and abandoned in a storage room in a sealed underground base.  This John Doe emerges in the year 2052 to learn that he is in Florida in a world changed by climate disaster, plague, and environmental collapse.  The Black Terror is now a group of revolutionaries, “The Black Terrors.”  The world has been turned upside down?  Where are the Superpowers?  And who is the amnesiac?

THE LOWDOWN:  In July 2021, Dynamite Entertainment's marketing department began providing me with PDF review copies of some of their titles.  One of them is Project Superpowers: Fractured States Volume 1 #1, which is the first Project Superpowers comic book that I have read.

I don't know if Ron Marz and Andy Lanning are or have ever been “superstar writers,” but who decides that?  They are indeed longtime veteran comic book writers, and they have been entertaining readers for decades.  With Project Superpowers: Fractured States, they are into another decade of entertaining us – as far as I'm concerned.  I like the sense of mystery in this story, and I doubly like that fact that they reveal a lot about the state of 2052, while making me interested in learning more in later issues.  Basically, their writing doesn't make me feel cheated.  This would still be an enjoyable individual comic book even if I did not keep reading this series.

Artist Emilio Utrera's art here has a classic 1970s comic book feel to it.  There is little Dave Cockrum here and a little Jack Kirby there, with some flourishes of Neal Adams and John Buscema all over the place.  The graphical storytelling is clear, but is also dynamic as befitting this wild first issue.  Arthur Hesli's colors infuse the story with a sense of mystery, action, and peril, and Tom Napolitano's letters do what they always do – convey drama and excitement.

I am shocked by this first issue.  I did not know what to expect of Project Superpowers: Fractured States Volume 1 #1, and now, I can't wait for the next issue.  I highly recommend it.

Posted by Leroy Douresseaux at 1:45 PM