Review: "THE KING'S MAN" is the Best "Kingsman" Yet 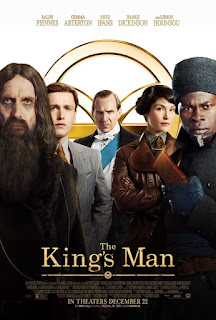 FANTASY/ACTION/SPY/WAR with some elements of comedy

The King's Man is a 2021 spy and action movie and war drama from director Matthew Vaughn.  It is the third film in the Kingsman film series, and it is a “prequel” to the previous two films, Kingsman: The Secret Service (2015) and Kingsman: The Golden Circle (2017).  All three films are based on characters and elements from the 2012 comic book miniseries, The Secret Service, by Mark Millar and Dave Gibbons.  The King's Man focuses on an aristocrat and his spy network as they try to stop a plot to pit the British, German, and Russian empires against each other in a war that will wipe out millions of lives.

The King's Man introduces British aristocrat Orlando, Duke of Oxford (Ralph Fiennes).  In 1914, Orlando has formed a private spy network consisting of domestic servants employed by the world's most powerful dignitaries.  His own servants, his butler, Shola (Djimon Hounsou), and his maid/nanny, Polly Watkins (Gemma Arterton), are his closest aides and confidants.  The primary objective of Orlando's network is to protect the United Kingdom and the British Empire from the conflagration of the approaching “Great War.”

Orlando's only son, Conrad (Harris Dickinson), is eager to fight, but Orlando forbids him from joining the British Army and uses his connections to keep him from entering service.  Besides, there are other things to keep father, son, and the spy network busy.  Orlando's friend, the Archduke Franz Ferdinand (Ron Cook), and his wife are assassinated.  Orlando learns that the assassin is part of “The Flock,” a group plotting to pit the German, Russian, and British empires against each other in the Great War.

Orlando and his network then engage in a series of adventures to foil the Flock's plans, that includes killing Grigori Rasputin (Rhys Ifans), the priest and mystic who serves the Flock's mysterious leader, “The Shepherd.”  As his personal physician, Rasputin practically controls Tsar Nicholas (Tom Hollander) of Russia.  And if Nicholas does as Rasputin wants, Great Britain may be doomed.  Can Orlando and his network stop The Shepherd and save the British Empire?  And will Conrad remain with his father's network or will he force his way into military service in a war in which young men like him are dying by the thousands?

The King's Man is easily the best of the Kingsman series, thus far.  The villain, “The Shepherd,” is ridiculous, but his motivations will make more sense and is more likely to appeal to British audiences.  For me, The Shepherd is what keeps The King's Man from being a truly great film.

The film's remix of the history of the “Great War” (World War I) seems inappropriate, but the film's inclusion of WWI is what makes it stand out from other films based on comic books.  In fact, The King's Man is grounded in a darker take on that war than another comic book movie, Wonder Woman (2017), which is also largely set during the first World War.  In a way, The King's Man seems like a salute to the men who served and the ones who died in the muck and mud of Europe during “the war to end all wars.”

Ralph Fiennes brings a touch of class and some serious dramatic chops to this film.  It seems as if director Matthew Vaughn and his co-writer, Karl Gajdusek, take this film more seriously than Vaughn did with the previous two films, which were action-spy movies with a strong comic overtone.  The King's Man is a war drama, spy serial, and action-thriller, and Fiennes, as Orlando, the Duke of Oxford, sells this film's seriousness.

Gemma Arterton and Djimon Hounsou are also quite good as Orlando's top lieutenants, Polly and Shola, respectively.  As Rasputin, Rhys Ifans offers a performance that is off-beat, over-the-top, and colorful.  Tom Hollander, with the help of the make-up and hairstyling crew of The King's Man, is credible in three roles, but makes his most potent turn as Britain's King George.  Harris Dickinson as Orlando's son, Conrad, gives the film's most hot-blooded and nuanced performance.

The best way I can describe The King's Man is as being like a serial adventure.  The film's plot is comprised of multiple missions and subplots, which keeps the film's narrative hopping.  The film moves fast, fast enough to keep audiences from focusing on the film's inconsistencies and flaws in logic, but also fast enough to make the story seem like a non-stop, breathtaking adventure.  Like Matthew Vaughn himself, I want to see a fourth film in the series, one that focuses on the characters that make it to the end of this film and on their first decade as the “Kingsman.”  I highly recommend The King's Man to audiences that have watched either of the first two films or both.  They were really a build up to the best of their lot, The King's Man.


The text is copyright © 2022 Leroy Douresseaux. All Rights Reserved. Contact this site for reprint and syndication rights and fees.

Posted by Leroy Douresseaux at 10:14 AM