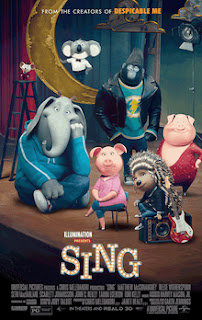 Sing is a 2016 computer-animated, jukebox musical comedy film written and directed by Garth Jennings and produced by Illumination Entertainment.  The film focuses on a struggling theater owner who holds a singing competition to save his theater.

Sing is set in a city (Calatonia) inhabited by anthropomorphic (humanoid) animals.  The film introduces Buster Moon (Matthew McConaughey), a koala who owns the “Moon Theater.”  The theater is struggling, and Judith (Rhea Perlman), a brown llama who represents Buster's bank, is threatening the theater with foreclosure.  In a bid to get people interested in the theater, Buster decides to hold a singing competition with a prize of $1,000 going to the winner.  However, Buster's secretary, Miss Crawly (Garth Jennings), an elderly iguana, accidentally creates a typo that adds two extra zeros to the prize money.  The misprinted fliers for the competition, which declare a $100,000 prize, are also accidentally blown all over the city.

Soon, animals are lined up in front of the theater for the competition's open audition, but Buster only chooses a select few to participate in the singing competition.  There is Rosita (Reese Witherspoon), a housewife and mother of 25 piglets.  She is paired with another pig, Gunter (Nick Kroll), an exuberant performer who wants to dance as much as he sings.  Ash (Scarlett Johansson) is a punk-rock porcupine and singer who is trying to find her voice as a songwriter.

Johnny (Taron Egerton) is a singer and teenage gorilla, but he is also reluctantly part of his father, Big Daddy's (Peter Serafinowicz) gang of thieves.  Mike (Seth MacFarlane) is a white mouse who is a street musician and singer of swing music.  Meena (Tori Kelly), a teenage elephant, could be a contestant, but she has terrible stage fright.  Can Buster and his friend, Eddie Noodleman (John C. Reilly), a sheep, bring everyone together and save the theater before financial doom sinks them all?

The Hollywood film industry, sometimes called a “dream factory,” has consistently been pedaling fantasies in which plucky underdogs overcome obstacles in order to achieve something positive, which provides the audience with a happy ending.  Some films pile trials and tribulations, errors, failures, and misfortune upon the hero and supporting characters so much so that it often strains credulity.  The idea seems to be that the more the underdog has to overcome, the greater the pay off for the audience when the underdog wins in the end.

That is Sing in the proverbial movie nutshell.  I found it rather tiresome.  Poor old Buster Moon suffers so much failure, most of it brought upon him by his own actions, that it made Buster less sympathetic to me.  Buster is a plucky theater owner.  He is also such a con artist that it is hard to imagine him as much more than a loser, which is what most people would call him.  It did not help that I found Matthew McConaughey all wrong as the voice of Buster.

For me, there are a couple of things that enhance Sing.  First is Seth MacFarlane, who is best known for the Fox Network's long-running, prime time animated television sitcom, “Family Guy.”  Initially, I did not recognize his voice as Mike the white mouse, but when I did, it made sense to me.  MacFarlane is a genius at voice acting in both live-action and animated productions.  He can sing the heck out of big band and swing music standards, and as Mike, he steals most of the scenes in which the character appears.  Seth certainly makes a case for a Mike solo movie.

Second, I also initially did not realize that Scarlett Johansson was the voice of Ash, the punk-rock porcupine.  Johansson gives a voice performance full of texture, emotion, and personality, and when Ash sings, Johansson kills it.  [Johannson has released one solo album and an album recorded with Pete Yorn].  I spent most of movie wanting for her to be back on screen.  I'm one vote for an Ash movie.

Finally, the third thing that saves this film is the last 20 minutes.  Most of Sing's characters are caricatures and character types, as pleasant as they may be.  However, all the characters (except Buster) shine in the film's riveting, song-filled final 20 minutes.  This rousing songfest even offers a thrilling jail break and a crazy car chase.  I avoided Sing for years, and I am not really interested in singing competitions, in general.  I only really watched it because I am going to watch and review its recent sequel, Sing 2.  However, MacFarlane, Johansson, and the show-stopping finale made me glad I watched Sing.  I like animated movies – even the ones that are not Pixar-great.