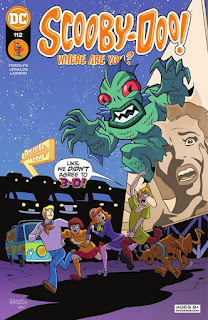 “Attack of the 8-Foot Amphibian!”

Scooby-Doo, Where Are You? #112 opens with “Attack of the 8-Foot Amphibian!,” which is written by Derek Fridolfs and drawn by Scott Jeralds.  The story finds Mystery Inc.:  Scooby-Doo, Shaggy, Fred, Daphne, and Velma in the “Mystery Machine” are arriving at the “Coolsville Drive-In” movie theater.  They are there for a screening of the classic monster movie, “The Ghoulie from Green Lagoon.”  It seems, however, that the Ghoulie has, of late, been rampaging through the drive-in.  Instead of a night at the movies, it's another mystery for Scooby and the gang.

The second story, “Creature Feature” is, as usual, a reprint story and is written by Sholly Fisch and drawn by Dario Brizuela.  [This story was originally published in Scooby-Doo, Where Are You? #38 (cover date: December 2013).]  The story opens on the set of the “Nocturna, Mistress of Midnight” television show.  Horror movie hostess, “Nocturna,” is screening the monster movie, “Attack of the Cabbage People,” when a real cabbage monster terrorizes the set.  It seems that “creepy creatures” from old movies have been plaguing the television studio for a few weeks.

First, the opening story, “Attack of the 8-Foot Amphibian!,” features the artwork of one of the very best Scooby-Doo comic book artists, Scott Jeralds.  His beautiful “clear-line” drawing style retains the classic design of the Scooby-Doo characters and adds a quirky modern visual sensibility.  The story is written by one of the better Scooby-Doo comic book writers, Derek Fridolfs, who is also an artist and who draws issue #112's cover.

Fridolf's script offers sly commentary about people's obsessions with their smart phones and about how people use camera phones to record events rather than live in those events themselves.  It seems that the only ones concerned with “the Green Ghoulie” is analog-era Mystery Inc, who fit in perfectly with the story's setting, a drive-in movie theater.  This offers an obvious contrast to the rest of the moviegoers who are too jaded to care about “old school” or “retro” things.

Like the reprint story in issue #111, issue 112's back-up story is also a reprint from an earlier issue of Scooby-Doo, Where Are You? rather than from the previous series, Scooby-Doo (1997-2010).  “Creature Feature” (originally published in 2013) is not quite as entertaining as “Attack of the 8-Foot Amphibian!,” but it does offer “Nocturna, Mistress of Midnight,” an homage to the great, real-life horror-hostess, “Elvira, Mistress of the Dark.”  For me, that's enough to make “Creature Feature” a winner.

So, I highly recommend Scooby-Doo, Where Are You? #112 to Scooby-Doo fans.  And until next time, Scooby-Dooby-Doo!

Posted by Leroy Douresseaux at 1:17 PM