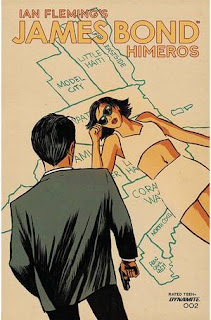 Over the past 50+ years, Bond has made sporadic appearances in comic books, but Dynamite Entertainment has been steadily publishing James Bond comic books since early 2016.  Their latest James Bond comic book is James Bond: Himeros.  It is written by Rodney Barnes; drawn by Antonio Ruso; colored by Adriano Augusto; and lettered by Social Myth Studios.  In Himeros, 007 finds himself caught in a web of powerful people who will kill to keep their child sex trafficking secrets from coming to light.

Wilhelm's Island proves to be a place of traps, and back in Florida Bond is wondering if he knows who activated those traps.  Meanwhile, someone comes calling for Richmond.

THE LOWDOWN:  Dynamite Entertainment's marketing department recently began providing me with PDF review copies of some of their titles.  One of them is James Bond: Himeros #2, which is one of several Dynamite James Bond comic books I've read.

As I have written many times previously, I am a huge fan of Himeros' writer, Rodney Barnes, because of his supreme vampire comic book, Killadelphia; his tragically canceled Marvel Comics series, Falcon; and his young Lando Calrissian comic book, Star Wars: Lando.  He recently dropped Nita Hawes' Nightmare Blog, from Image Comics, which has huge upside, judging by the first issue.  Barnes keeps me in his harem of readers with some lovely action in Himeros #2, especially because he includes a classic 007 element of thrills.

Antonio Ruso's art and storytelling come at the readers like lightning-quick punches, capturing all the surprising kinetic action.  Adriano Augusto's colors capture the exotic settings and moods of traditional James Bond fiction, but this time, he also offers the hues of fast and furious.  “Himeros” is the Greek god of sexual desire, and after reading James Bond: Himeros #2,  dear readers, I think you will desire this series also.