Comics Review: "SHEENA Queen of the Jungle #1" is a Cool Start 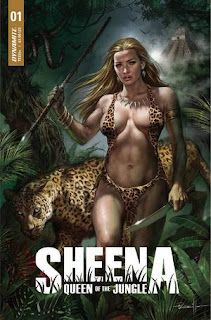 Dynamite began publishing Sheena comics in 2017 with a series that ran ten issues.  Dynamite is debuting a second series, Sheena: Queen of the Jungle, Volume 2.  It is written by Stephen Mooney; drawn by Jethro Morales; colored by Dinei Ribero; and lettered by Taylor Esposito.  The story finds Sheena investigating the strange goings on in a cutting-edge bio-dome.

As Sheena: Queen of the Jungle, Volume 2 #1 opens, Sheena awakens in a swanky hotel in Val Verde.  Apparently, the Cardwell family has come calling again.  It seems they are behind a huge scientific project, a “bio-dome” in the middle of the Val Verde jungle.  It is an amazing synthesis of the natural world and the man-made world of the future, but the first travelers into the dome have disappeared.

That is where Sheena comes into the picture.  With her friends:  Yaqua, Chim, and Pete held out as ransom, of a sort, Sheena enters the bio-dome to find the missing people.  The walled-off jungle however hides violent death, many mysteries, and human trickery and deceit.

THE LOWDOWN:  Dynamite Entertainment's marketing department recently began providing me with PDF review copies of some of their titles.  One of them is Sheena Queen of the Jungle Volume 2 #1, which is the first Dynamite Sheena comic book that I have read.  I think I did read Marvel Comics' two-issue version of its adaptation of the 1984 film, Sheena (which starred the late Tanya Roberts in the title role).

Stephen Mooney, Jethro Morales, Dinei Ribero; and Taylor Esposito, the creative team behind the recent comic book miniseries, Bettie Page and the Curse of the Banshee, slide right on into Sheena: Queen of the Jungle Volume 2, delivering deceit, trickery, and murder mystery most foul.  Mooney's script is a reader-grabber right from the first page, and by the end of this first chapter, that script practically held me hostage right along with Sheena.

Stephen Mooney can draw good girl art with the best of them, but his graphical storytelling is as strong as the illustrations are pretty.  Dinei Ribero also delivers pretty colors, but it can turn pretty dark when Sheena starts finding bodies.  Taylor Esposito's lettering tosses around the humor just before dropping in all the shocking reveals.

I'm totally surprised, as I really didn't expect a lot from this new Sheena series.  I thought it might be mildly entertaining, but this first issue makes me anxious for the next issue.

I READS YOU RECOMMENDS:  Fans of Sheena will want to try Sheena: Queen of the Jungle Volume 2.

Posted by Leroy Douresseaux at 7:26 PM