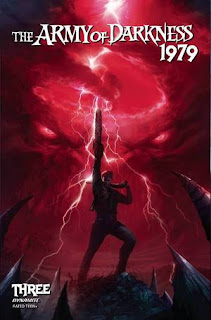 As The Army of Darkness 1979 Volume 1 #3 opens, Ash and “The Half Deads” street gang are getting the worst of it from rival street gang, “The Panthers.”  Even if the tide turns, “The Mrs. Bradys” are waiting to deliver their special brand of motherly love.

Not far away, the leader of “The Warlocks” is still in possession of the Necronomicon, and he sees this as a chance for world domination.  However, the rest of his gang just wants to use the dark magic for some creature comforts.  How will their leader deal with this dissension?  Meanwhile, the streets of New York City are in a panic and awash in meat puddles and bloody mush!

This third issue of the series may be the funniest yet.  Writer Rodney Barnes uses a two-page section that depicts a mayoral press conference and local TV reporter to deliver trademark Army of Darkness comic horror dialogue, ghoulish wit, and mockery.  Meanwhile, Tom Garcia draws his strongest art yet, so Army of Darkness 1979 Volume 1 is steadily pumping up the volume.