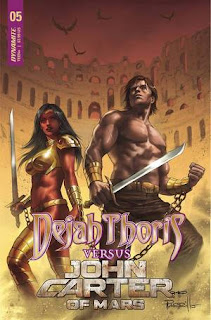 As Dejah Thoris Versus John Carter #5 opens, Rotak Gall finds out that his allies from outside of time, The Longborn, are not easy to please.  Meanwhile, Dejah and John continue to fight impossible odds in the time-lost palace of Dar Shadeth.  Having escaped into the random folds of time, they must survive … if they are going to survive the coming struggle.  Decaying emissaries of evil are searching for the perfect host, which could be … John Carter.

THE LOWDOWN:  Dynamite Entertainment's marketing department recently began providing me with PDF review copies of some of their titles.  One of them is Dejah Thoris Versus John Carter #5, the fifth issue of the series that I have read and only the fifth Dejah Thoris or John Carter comic book I have read.

In Dejah Thoris Versus John Carter, writer Dan Abnett offers a comic book that gives off traditional serial fiction thrills.  A quick and delightful read, I always find myself wanting more by the time I reach the last page.  Also, Artist Alessandro Miracolo and colorist Dearbhla Kelly get stronger with each issue.  I highly recommend Dejah Thoris Versus John Carter to fans of Dan Abnett's comic book work.

Posted by Leroy Douresseaux at 4:31 PM