Comics Review: "THE MAGIC ORDER 2 #2" Could Bring About a Climax 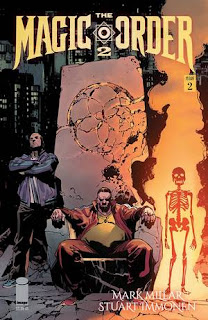 A second six-issue miniseries, The Magic Order 2, has arrived.  It is written by Mark Millar; drawn by Stuart Immonen; colored by Sunny Gho; and lettered by Clem Robins.  The new series focuses on a magical turf war between The Magic Order and a group of Eastern European warlocks whose ancestors the Order once banished.

As The Magic Order 2 #2 opens, the wizard Francis King returns from an addiction center … just in time, as the Order needs all the members it can summon.  The Moonstones, Cordelia and Regan, and their cousin, Kevin Mitchell, have discovered that a piece of the Stone of Thoth has been taken.  A talisman from ancient Egypt that summon anything from space, time, and beyond, the Stone of Thoth has been guarded by Kevin's chapter of the Order.  It was divided into four pieces and hidden, and now, an unknown enemy is searching out the pieces.

Five hundred years after The Magic Order made all the monsters disappear, they are mysteriously reappearing.  And the dark forces that are magic's underbelly are emerging.

THE LOWDOWN:  I've been saying this for a few years.  The Magic Order is my favorite Mark Millar written, creator-owned comic book.  When it debuted three years ago, the series gave us a thrilling introduction to a new world and new universe of magic, magical beings, and magical conspiracies.  The Magic Order is really like a blend of Harry Potter with a Martin Scorsese mob film.

To read and enjoy and understand The Magic Order 2, one does not have to have read the original series.  Mark Millar throws readers right into a riveting and alluring conspiracy, and his script for The Magic Order 2 #2 recalls the riveting thrills of Batman: The Dark Knight Returns and the alluring conspiracy of Watchmen.  One of the things that made these comic books so great was that reading them was like experiencing something that had never been seen in the mainstream American comic books that had come before them.

Becoming a Netflix executive did not stop Mark Millar from being one of the very best comic book writers in the English language.  He has given The Magic Order 2 #2 to us as a warning, just in case we thought that he might have slipped.

Posted by Leroy Douresseaux at 6:34 AM