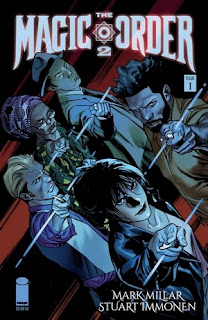 A second six-issue miniseries, The Magic Order 2, has arrived.  It is written by Mark Millar; drawn by Stuart Immonen; colored by Sunny Gho; and lettered by Clem Robins.

As The Magic Order 2 #1 opens, it has been six months since Cordelia Moonstone cast that spell involving her late brother, Gabriel.  Right now, her brother, Regan, and his friend, Eddie, are dealing with a boy and his awful imaginary friend.  Meanwhile, Cordelia is living her best lust … er... life.

Now, it's time for a family reunion, of sorts, for the birthday of their niece, Gabriel's daughter, Rosetta “Rosie” Moonstone.  But the festivities are interrupted by a visit from the London chapter of the Order.  An old bloodline of dark forces is starting to flow again.

THE LOWDOWN:  I think The Magic Order is my favorite Mark Millar written, creator-owned comic book.  When it debuted three years ago, the series gave us a thrilling introduction to a new world and new universe of magic, magical beings, and magical conspiracies.  The Magic Order is really like a blend of Harry Potter with a Martin Scorsese mob film.

The Magic Order 2 #1 reads best if you, dear readers, read the first series, but I believe that most readers can love this first issue even if this is their first taste of the spell that is the universe of The Magic Order.  Millar throws the readers right into a riveting and alluring conspiracy, and every page is a wonder that makes me want more.  I could have screamed when I looked at the last page, knowing that I have to wait for more.  Truthfully, the opening of this second series is like the opening of the first; Millar throws the readers right into murder, mystery, dark magic, and conspiracy.

Stuart Immonen is probably the perfect replacement for original series artist, Olivier Coipel, as like Coipel, Immonen is a veteran artist with exceptional skills at composition and with strong storytelling skills.  The franchise does not miss a beat from first to second, mainly because Immonen's art looks similar to Coipel's.  Sunny Gho's colors convey the story's shifting moods, but also hint at the sense of menace and dread that hangs over this first chapter.  And as always, letterer Clem Robins makes sure we hear the coming fury.

Lord knows I've been waiting, and The Magic Order 2 #1 does not disappoint on any level.  The excitement, secrets, thrills, and magic are back.