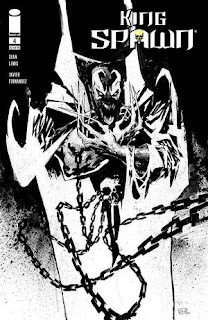 As King Spawn #4 opens, it's the showdown between Spawn and one of his oldest and vilest enemies, the child killer, Billy Kincaid.  But this mutha is supposed to be burning in Hell!  So why is he here?  And why is he so happy to face Spawn again … even if the outcome will be awful for him.

Meanwhile, Medieval Spawn and Jessica (She-Spawn) are globetrotting hunter-killers of terrorists.  So why are the locations of their fights so familiar?  Plus, there is a warning from Mother Nature.

THE LOWDOWN:  King Spawn continues its impressive debut as the most impressive Spawn spin-off comic book to date.  Sean Lewis presents Spawn in all his raging glory, unleashing ultra-violence, even when he knows that this is what his adversaries want.  This is the way Lewis builds a sense of mystery and of anticipation, so we know something good and crazy is coming.

Javi Fernandez's art and storytelling capture the craziness, dragging us along in Spawn's wake.  So vivid is Fernandez's storytelling that you, dear readers, might feel icky … or delighted … if a bordello of blood is your thing.  And if you don't get it, FCO Plascencia's colors present the violence in living color.

King Spawn is still ruling, so won't you consent to be ruled.  Seriously, this is a good … superhero comic book.

Posted by Leroy Douresseaux at 1:13 PM