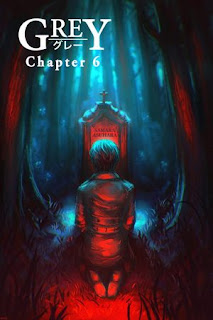 Grey is an independent comic book series from writer Kris Hornett and artist Ardee Arollado.  Published by The Grey Room, Grey is a hybrid, a combination of an American comic book format and Japanese manga.  Grey is similar to what was once called “OEL manga” or “original English language” manga.  These were American graphic novels in which the storytelling borrowed or mimicked the aesthetics and sensibilities of Japanese manga (comics).

Grey is set in the realm of Ketiyama (apparently an archipelago) and takes place some time after an event known as “the Sonoma Incident.”  This outbreak of the lethal “Moon Virus” on Nacirema, one of Ketiyama's islands, led to chaos, destruction, and division.  As a sign of good faith and as a last attempt to restore order, the ruling Board of Officials allowed the people to elect a team of highly trained tactical agents, known as “the Bureau,” to serve and protect them.  Within the Bureau is an elite unit known as “Nimbus.”  The members of this team of five agents are sworn to maintain moral balance and to enforce the law.  These agents are also able to manipulate their “prana” (“life energy”).

Grey Chapter 6 opens as Samara, Kouken, and Shuyin enter “the Sea of Trees” in their search for the kidnapped Asuka Yagyu.  This place is the subject of numerous urban legends, including tales of people committing suicide after the trees force them to relive their biggest regrets.

Once she is separated from Kouken and Shuyin, Samara finds the sea takes a toll on her.  She begins to relive her life before Nimbus.  Samara recalls her time with a friend and with the friend's brother who becomes her lover.  And Samara also realizes why she isn't a “hero,” so how will this affect the current rescue mission?

THE LOWDOWN:  The Grey Room has released the first trade paperback collection of Grey, entitled Grey: Volume 1.  This TPB reprints Grey Chapters 1 to 5, as well as, Chapter 3.5: Astrid and Chapter 4.5: The Right Thing, both “special release chapters.”  I think this collection is the best way to read the series up to that point, as it will reinforce to readers how conceptually well-developed Grey is.

Meanwhile, Grey. Chapter 6 is available to readers.  As I have previously written, when readers start from the beginning, they discover that the world in which Grey is set has a complex history.  Readers get to watch the authors build a world in front of them and also to experience some other elements of the series, such as its engaging mysteries and sense of discovery.

In addition to the complex nature of the narrative, Grey also offers strong characters – lead and supporting – as can be seen in Grey Chapter 6.  While ostensibly about a rescue, Chapter 6 is a deeply intimate portrait of the character, Samara Asuhara.  Writer Kris Hornett does this by examining Samara's actions in the past, which are quite shocking and illuminating.  I give Hornett credit for his willingness to give his characters an edginess, a merger of the light and the dark which creates a … gray area to be explored.

Hornett does not treat his characters as if they were delicate pastries with multiple layers of tastiness.  Grey characters are crunchy with complex flavors and who knows what the aftertaste will be.  Grey is not a world of plush figures.  If the characters had to be toys, they would have sharp edges and come with warning labels on the packaging.

In Grey Chapter 6, Ardee Arollado's art, which becomes more polished with each chapter, captures the surreal nature of the flashback as well as its melodrama of deadly machinations.  His page design, with its large panels and expressive faces, conveys power to the reader, giving Chapter 6 a hypnotic quality.

So, once again I heartily recommend Grey to you, dear readers.  With a first trade paperback and the newly released Grey Chapter 6, this is a good time to come on in.

I READS YOU RECOMMENDS:  Fans of manga-inspired comic books and of good science fiction comic books will want to read Grey.


Digital issues of Grey can be found at comiXology: https://www.comixology.com/Grey/comics-publisher/20880-0.  Readers can also purchase all issues of the series and the new first trade collection, Grey: Volume 1 at https://thegreyroom.org/.