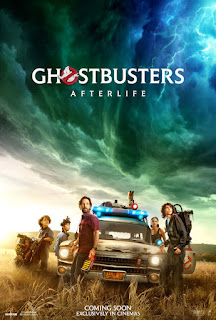 Ghostbusters: Afterlife is a 2021 supernatural comedy, action and mystery film from director Jason Reitman.  It is the fourth entry in the Ghostbusters film franchise and is a kind of sequel to the original film, 1984's Ghost Busters (now known as “Ghostbusters”), which was directed by Jason's father, Ivan Reitman.  In Afterlife, a single mother and her two children arrive in small town Oklahoma, and the children discover their grandfather's amazing and secret legacy.

Thirty-two years after the events of Ghostbusters II (1989), Callie Spengler (Carrie Coon) and her two children, son Trevor (Finn Wolfhard) and daughter Phoebe (Mckenna Grace), arrive in Summerville, Oklahoma.  Currently homeless, they will try to make a new home in the rundown farmhouse owned by Callie's late father, Egon Spengler.  While rooting through some of Egon's belongings, Phoebe discovers a P.K.G. Meter (a ghost-tracking device).  While digging around, Trevor finds a beat-up old car that sports the “Ghostbusters” logo.

Phoebe, who does not believe in the supernatural, makes a friend, a boy named “Podcast” (Logan Kim), who believes in the strange and unusual and discusses it in his podcast.  Trevor makes a friend in a local, a teen girl named Lucky Domingo (Celeste O'Connor).  Eventually, the children discover that Phoebe's summer school teacher, Gary Grooberson (Paul Rudd), is quite familiar with their grandfather, Egon's legacy as a scientist, an inventor, and a member of “Ghostbusters,” the ghost-catching organization that was famous for its activities in 1980s New York City.  Now, the four youngsters and Callie and Gary must face the same great evil that once confronted the original Ghostbusters.

I was a huge fan of the original Ghostbusters films.  When I first saw Ghost Busters in a movie theater in 1984, I laughed so much that the other people in the theater were giving me the side eye.  I enjoyed the sequel, Ghostbusters II (1989), although many people I knew at the time did not like it all that much.  Still, I was happy, but over the years, Ghostbusters became a fond memory that I sometimes relived via my cable TV package.  In the years that followed Ghostbusters II, there was always talk of a third Ghostbusters film, but I was only mildly interested.

For some people, however, the Ghostbuster films and the related merchandise became a lifestyle choice, something to which they dedicated themselves as if it were hobby, a second career, and maybe even a quasi-religion.  Those were the people who claimed to have been traumatized by the 2016 franchise reboot, Ghostbusters, which featured an all-female cast as the Ghostbusters (and which may have since been re-titled “Ghostbusters: Answer the Call”).  I was only mildly interested in that film, and have seen most of it via cable TV.

Ghostbusters: Afterlife is supposed to remedy the trauma of Ghostbusters 2016.  Afterlife director Jason Reitman once said that his film was giving Ghostbusters “back to the fans.”  I never felt like something had been taken from me.  After all, as I've said, I can see the original films at least a few times a week on television.  That said, I do like Afterlife.

Reitman offers an exciting film that is as much a mystery film as it is a comedy, and the secrets of the town of Summerville and its surroundings are quite intriguing and provide a nice setting for the story.  I do wish that the film had given us more on the town and its inhabitants.  However, there is much focus on the darkness at the edge of town – the big bad supernatural being.  Reitman and his co-writer, Gil Kenan, work overtime to make sure everyone understands that the villain is connected to the events of the original film.  I didn't find that connection necessary, but I understand why Reitman and Sony Pictures felt that it was very important to make a hard connection between the events of 1984 and the events of 2021.

Ghostbusters: Afterlife's shining light isn't the desperation to connect to a 37-year-old movie.  Afterlife's true treasures are its young stars:  Mckenna Grace as Phoebe, Finn Wolfhard as Trevor, Celeste O'Connor as Lucky, and Logan Kim as Podcast.  As Phoebe, Grace is totally capable of carrying this film's emotional center and of stabilizing its subplots and narrative threads until they come together.  When Jason Reitman focuses on his young cast, turning them into young supernatural investigators and Ghostbusters, Afterlife explodes with life and has all the magic of an old-fashioned summer blockbuster movie in spite of its November release date.

Yes, it was good to see the original cast members.  No, Paul Rudd is not the star of Afterlife, as the film's trailers and commercials suggest, but he is important to the development of the story.  Yes, Carrie Coon is good as the kid's mother, Callie.  However, it is time for this franchise to move on from nostalgia and fanservice if it is going to have a future.  These four young actors and four new characters are why Ghostbusters: Afterlife can be a true resurrection story.

Posted by Leroy Douresseaux at 1:28 PM