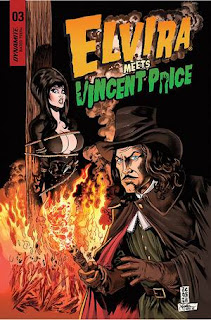 Elvira and Vincent Price team up for the first time in the comic book miniseries, Elvira Meets Vincent Price.  The series is written by David Avallone; drawn by Juan Samu; colored by Walter Pereyra; and lettered by Taylor Esposito with Elizabeth Sharland.  The series finds Elvira and Price searching for a long-lost cult movie, “Rise of the Ram,” because it contains an incantation that can save the world from destruction at the hands of the ancient Egyptian god, Amun-Ra.

As Elvira Meets Vincent Price #3 (“Raiders of the Lost Schlock”) opens, Elvira and Vincent travel to Cairo, Egypt in hopes of finding the one person who could still have a copy of “Rise of the Ram,” the film's screenwriter, Ahmed Alhazred.  Our ghoulish duo finds him at “The Pyramid Fields of Abu Sir,” conducting tours and doing archaeological work.  Elvira and Vincent get lucky, as Ahmed has even more good news for them about The Books of the End of All Things, a scroll that has suddenly become an important part of Elvira and Vincent's quest.

However, they are unaware that they are being stalked by the “Sons of the Desert.”  Even if they avoid that trouble, their main adversary is about to make her big appearance.

THE LOWDOWN:  Dynamite Entertainment's marketing department recently began providing me with PDF review copies of some of their titles.  One of them is Elvira Meets Vincent Price #3, which is the third issue of the series that I have read and one of many Dynamite Elvira comic books that I have thoroughly enjoyed.

I have been a fan of writer David Avallone's Elvira comic books for a few years now.  Once again, an issue of Elvira Meets Vincent Price reminds me, if I need a reminder (which I don't), why I love these comic books so much.  In this third issue, Avallone gifts his readers a game of cat-and-mouse among the pyramids.  His script is filled with sparkling comedy, witty asides, and enough cultural references to make Quentin Tarantino jealous.  I should not forget the funny bit players and supporting characters like the “Sons of the Desert” who may be a riff on a kind of silent movie stock villain.

I could read another 100 pages of Elvira Meets Vincent Price #3; I'm addicted.  Dear readers, don't deny yourself this cure for the pandemic-time blues.

Posted by Leroy Douresseaux at 1:39 PM